Never Cared Much for Retrievin'

Artemis, my aging GSP, never cared much for retrieving. Never really had to, I guess.  A few times I greatly regretted not insisting on this more, but those were generally fleeting pangs; Artemis hunts dead pretty well.
Today I decided to work a woodcock hunt into my Friday schedule, to honor old Spy (over whom I think I shot my first woodcock, in Maine... or maybe that was Butch...), and to tune up "Miss" for a week in the ADKs. It was a full moon, and it had been windy so maybe there'd be birds in my favorite coverts, I thought. I enjoyed the sound of the laptop closing, signalling the end of the week and a clean break for the woods. We headed for the Finger Lakes National Forest.

Miss was excited to be out, and it was windy, so I opted for two bells, each with a different tone, which has been working well for me. She was on birds quickly and I missed two in the first five minutes. I called Miss to heel and we took a little time out together.  Miss seemed to understand the little exercise, and didn't push to move or whine. She just relaxed, her nose opening and closing like bellows, but otherwise still. I soaked in the wet smeary fall colors, the mosaic of landscapes on the ridge, and cloudscapes in the sky. I breathed deeply the poignant aromas of wet autumn leaves mixed with a little pine. I admired the familiar lines of my LC Smith 20 gauge, which was a key to a door I thought permanently closed, but opened by Josh who encouraged me to just give shooting left-handed a try ( a massive turning point in my life, but that story is for another day). I recalled other friends, too, that I shared many memorable hunts with in these woods. I smiled at my good fortune, a gesture not lost on Miss, who perked up.  "Find a bird," I said enthusiastically, having firmly pressed the reset button.

She hunted flawlessly, pointing and holding woodcock among the head-high dogwoods. There were two in the bag in the span of 5 minutes, and a third fell from a group of three Miss pointed in a rose thicket. A dramatic turnaround and exhilarating flurry of upland bird hunting at its finest. I was thrilled, each time I saw the bird fold and Artemis follow up, locating and worrying the bird a bit before looking  up to be sure I saw her mark of the downed quarry.

After picking up the third bird and placing it gingerly in my shooting vest's game pouch, I thought it would be nice to get a good picture. There was a pond very near, with a barbed wire fence around it, which I thought would do nicely for an October sporting photo. The shot would take advantage of the pond in the background, and I could use the wire to hang the birds rather than the more typical placed-on-the-ground shot. I emptied my gun, set it securely against the fence, and reached in my pouch for a woodcock. I felt around  and found one, pulled it out and brought my other hand to it, to admire it again before hanging it and thus transforming it from quarry to food in my possession. I looked at it for a moment and vaguely wished I knew how to sex and age woodcock, when the bird fluttered and flew away, landing with a splash in the middle of the pond!

Every hunter has experienced that perfect moment that turns imperfect. The fantastic buck that eludes easy recovery, plaguing the hunter with all manner of self-doubt and anxiety. The great shot on a first drake Canvasback that lands in the cattails, besting the trusty retriever. But a woodcock escaping the game bag and splashing down in the middle of a pond?

I looked at Miss, who came when I called her, but had missed the drama. I looked at her the way a coach looks at his kicker who hasn't made one all year, but is needed now, to win the big game. I think my dog deeply resented me looking at her that way, judging by her facial expression. Or, she was thinking "this kind of thing only happens to the most idiotic of orange-clad men."

Artemis never cared much for retrievin' , but her number was called to make a play. I brought her to the water's edge. She smelled the bird and worked the bank a little. The bird fluttered and splashed a bit, drawing the dog's attention. She looked back at me. Sheepishly, I said "Miss, get the bird," while pointing out over the water. She walked to the water's edge, stepped slowly but confidently in, swam to the bird and retrieved like she was a duck dog doing a boring drill. All I could muster at first when she dropped the exhausted bird in my hand was "thank you.... good girl." But she already knew that. 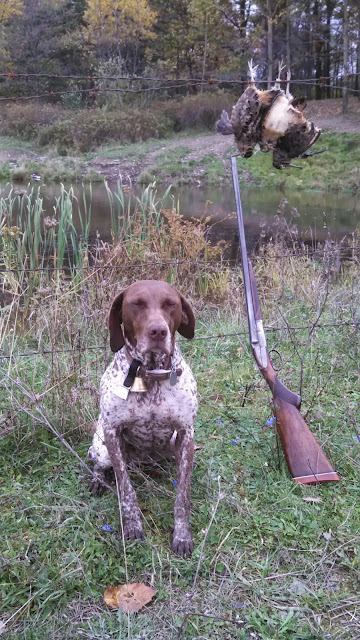 awesome writeup Cagey. the birds, they will take to the water....