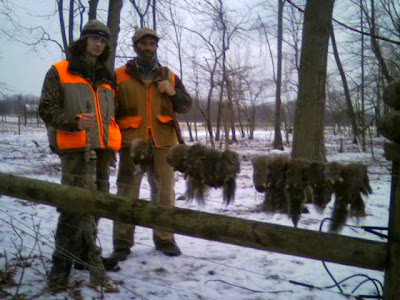 George and Zack ridding the Canoga Farm of some of its rodents.
Posted by KGT (aka Cagey) at 8:09 PM No comments:

...wish it were Ducky

Couldn't stand the chimps anymore, or the lack of grousey porn...so, I went digging in the photo archives and found these two photos taken duck hunting near Nangemoy on the Chesapeake Bay, circa 2000. Classics. 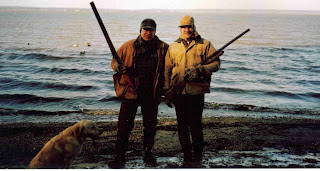 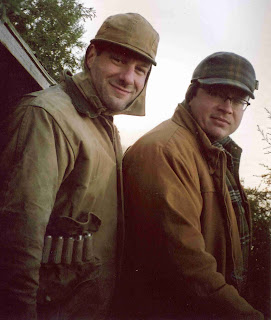 Dr. Research stole my latest poetic effort away from me following yesterday's scintillating seminar. Here it is reconstructed as best I can manage, a five line "tanka" that conforms to the 5-7-5-7-7 pattern well-known to gender-confused wordsmiths from the time of the Tang Dynasty onward.


smart, very smart chimps
poking at ant hills with sticks
science is sketchy
they lack a concept of stick
but they are still very smart
Posted by Jim Tantillo at 3:59 PM 3 comments: 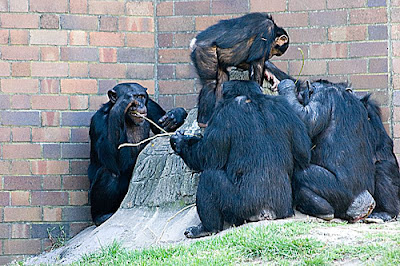 . . . and all the monkeys showed up. Here we see them utilizing collaborative research methods (bricolage) in the Ivory Tower.

Here is Dr. Research, mighty proud of himself after the seminar. He's going to Disney World. 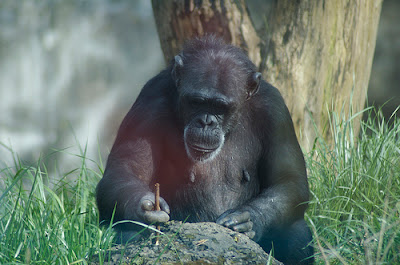 Dr. Research
Posted by Jim Tantillo at 6:04 PM No comments:

Pinning all our hopes on these guys . . . Andy_and_Safari_2000
Originally uploaded by frankzappai
Just thought I'd fan the flames a bit. Andy, you bring the fixings for woodcock soup, and Jim you bring the GPS cheaters' maps.

p.s. Pete, I don't think Safari has taken anything NEAR the amount of abuse he deserves.
Posted by Jim T at 7:32 PM 5 comments:

The One, True, Correct Way to Hunt Big Game

I have this video on recommendation of Mr. Michael Miezzzzzzhak, of "Mr. Mike" fame. Enjoy.

Jonah and the doe.
Thinking of the warm, still form;
In leaves he rests, breathes.
Posted by Anonymous at 8:55 PM 4 comments:

I am once again a "Published Haiku Poet."

Arkansas has nothing on beer camp!

Super Bowl Sunday was a day of respite for myself due to the events that preceeded the day. Wednesday and Thursday found me entertaining a business associate, in from Isreal for a visit, so I had a late night and early mornings. Thursday evening found me sitting around the usual Thursday night poker table with the local farmers. Robert was telling me about the few snows he was seeing while out painting the fields behind beer camp with the bi-product of having cows. As I get home after 5:30 in the evening I don't usualy get to see the ariel goings on's of the local waterfowl population. Due to the late night a poker on Thursday I found myself tired and wanting to just sit around, but alas I had to get ready for yet another day of cards as I had an all day acey - deucy tournement to attend on Saturday. Again this day was to be spent with a different group of local farmers and friends. I sent the evening getting the old truck ready to hook up to "Carol Camp" the next morning and was happy to find all in order. Saturday I arose and went to Beer camp to hitch up the camper, and as usual, the morning flock of geese flew low overhead to let me know hey were still in the area. Back to the house I went loaded up and got my "dish to pass" of bacon wraped scallops ready to go. The day was full of fun, and a lot of picking on going on. You see I was showing up as the defending champion from the last 2 years tournaments so there were a lot of sights pointed at me. The evening ended with me going out about 1/2 way through, to the delight of many, but I came back a bit in the side games. I slept in until mid morning and after a couple of cups of coffee I headed back home. I guess that was a lot of BS to read through just to get back to Super Bowl Sunday and by the way what does that have to do with Arkansas, I digress. It's now around 10:30 in the morning and I'm looking out the sliding glass door that looks out on the back fields. Right in front is the bird feeder where the squirrel's are having a feast. The thought comes across my mind that I should have gotten up earlier to attend the Squirrel Hunt at the Sportsmans club but I had not paid my entry so it was a mute point. My eyes caught the sight, through the overcast morning haze, of a large flock of ducks dumping into the back field. I thought this a bit pecular because ducks usualy circle several times before making their final descent to the ground. I went back to my business at hand, of relaxation on the couch, with clicker in hand only to be enticed back to the door several times during the day for a glimpse of the goings on. I guess it would be kinda like sitting on Keiths porch watching the events on the lake, or sitting in the Double Black without looking out, it was that enticing. Anyways I noticed that each and every time I did this another large flock of ducks would materialsize out of the clouds and just dump into the field. Naturaly I had my binoculars nearby and saw that indeed the field was filling with ducks. You notice I'm not mentioning Geese here! Thats because only a few of them went in with the ducks, it was almost all ducks out there. Finaly, with curiousity getting the better of me, at about 3:30 in the afternoon I could not take it any longer. I summoned Carol to the glass door and said to her "get the binocs and be prepared to watch something spectacilar" but even I was not ready for what happened next. I have been an avid reader of Ducks Unlimited and often watch hunting shows that make you sometimes question, how did they ever get so many ducks in one place? I now know a likely answer, paint the field with manure! I took a stroll out to the dozer pile and was amazed at what I was experiancing. There were Thousands, yes thats right I said Thousands, of ducks covering the field from end to end. All 30+ acres were covered with blacks and mallards. As I approched the birds would simply fly 100 yards and land back in. several let me pass within 50 feet of them without moving! As I walked further and further into the fray they stated to leave the field by the hundreds. Now both the field and sky were full of birds. I cannot describe to you what an exilerating feeling it was to be walking amongst that many ducks. Their lack of aparent fear of me due to their numbers, or was it the yoda aura about me that calmed them, was amazing. To have them simply land back in the field was incredible. I guess this would be the best time in this post to show a picture of what I saw but alas I forgot my camera. Another DU photo oppertunity missed! Oh well at least I have a perfect picture in my head of what I saw. As Eric says, "see you in the blind!"
Posted by Ernie at 12:08 PM 4 comments:

"The advertiser invents ideas, and ideas are seldom as honest as physical objects...one deserves special mention: the 'where-to-go' department. Knowledge of the whereabouts of good hunting or fishing is a very personal form of property. It is like rod, dog, or gun: a thing to be loaned or given as a personal courtesy. But to hawk it in the marketplace...seems to me another matter....All of these organized promiscuities tend to depersonalize one of the essentially personal elements in outdoor sports. I do not know where the line lies between legitimate and illegitimate practice; I am convinced, though, that the 'where to go' service has broken all bounds of reason." (Wildlife in American Culture)

For those of us that need as much help as we can get, I just discovered Northwinds Enterprises and their Grouse Habitat Maps. Looks like a good investment, especially for someone that doesn't have a lot of time for scouting locations. I see they avoided that State of NY?

For those of you that need some additional help, they're also offering Grouse & Woodcock (PRO) Hunter Workshops at various locations across the Midwest and NE.

I realize it's 9 months away, but need to start thinking about when we're going to convene GROUSE CAMP 2008? Will need to arrange my teaching schedule around so I can be sure to get away.

I just remembered there is a goose season this year in March in the southern zone. I am looking for a place to hunt, so if anyone knows of anywhere we can kill some geese in the southern zone let me know. All you professin' types in Ithaca must know of some place we can hunt down there.

See you in the blind Eric
Posted by Eric at 4:48 PM No comments: 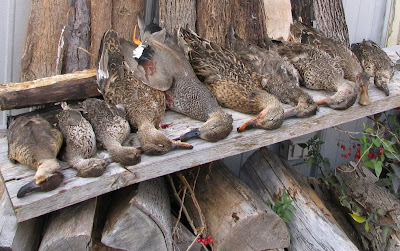 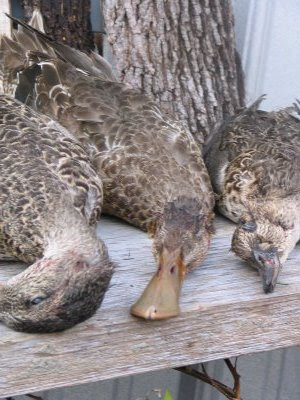 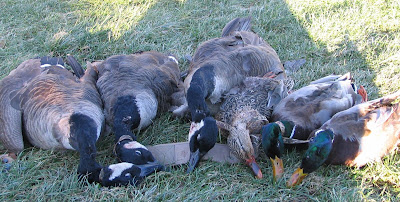 First I must apologize for being such a lame duck lately and not posting.Sadly our waterfowl season is over however it was a great season with lots of good hunts and lots of good times in the blind with great friends. I am already looking foward to next year. I thought I would post a couple of pics from the season and promise to try harder at not being a lame duck.