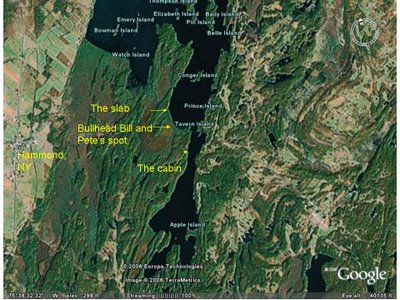 I only just downloaded Google Earth. I couldn't help make my first application of the software a useful one. Here's a power point file that we can update over the years...Pete
Posted by KGT (aka Cagey) at 3:08 PM 2 comments:

Before too much time passes: grouse report

Cagey and I managed to get out to Tug Hill last Friday 9/22 for a day of grouse hunting. In short we saw a nice number of birds.

We hunted Missy first and left the gimpy setter in the truck for the a.m. The best opportunity of the day came 20 minutes into the first hunt: Missy absolutely nailed a grouse near an old foundation under some spruces and pines and in some thick goldenroddy stuff. On our approach she relocated, nailed it again, and Keith said, "You da man." I started walking in on it when the bird flushed, making an enormous racket that (ahem) threw us both off our game. Honestly, it was like the bird took ten seconds to get up and out of the gnarlies--and then it zoomed right out into the open in front of me at a range of ten feet.

We followed the bird, and on a reflush it flew across a swamp--which we crossed dutifully, but we didn't see that bird again.

Later Missy pointed another couple of birds, one of which was holding right in front of Keith and Missy. Keith calls me over, he's got Missy by the collar, and then he says: "You ready?" Thinking the bird is out front in the woods somewhere, I say "sure." He lets the dog go, and twenty yards away the bird flushes out in the open, a beautiful gray phase, that neither of us shot at. I think my groove was off again. Yeah, that's it.

All told Missy pointed and/or we flushed a total of 6-7 birds, not bad for a two hour hunt. I'd have to say now that in my mind, and for the record and officially yadda yadda yadda, I think Keith has got himself a real grouse dog. I heard him mutter to his wife on the phone later something to the effect of "Missy wasn't perfect today," but hey, Cabin Boy--get over it! no dogge's ever perfect. She did great. I would hunt with her again, and it sure is nice to have a dog that doesn't absolutely drag you through the gnarlies everytime she sniffs a potential bird in the bush.

We returned to the truck, relaxed a bit; then relocated the venue to a spot I knew about near Rectors in Montague. In an hour's hunt Kate pointed 5 or so birds; we didn't see them basically because "it was September." Actually it was kind of balsamy and sprucey where we were. One bird I managed to see just as I was falling backward (and laughing about it) having tripped on a stick walking in on Kate's point. Again, I was off my groove.

Katie took a while to warm up to the running/hunting (first real time running crosscountry since her surgery in May), but once she smelled birds she was like the Kate of old--maybe having lost a half step, but her intensity was there. That was good to see.

Late in the day we tried a trail I'd wanted to explore for some time, but we were skunked there with the Mistress. Who knows where the birds were, it was a decent covert.

Well, that's about that. It's been a busy week, sorry this writeup is tardy. I managed to get up to Tug Hill again on Monday. In three separate one hour hunts, Katie pointed zero, two, and six birds respectively. So numbers are decent. The six birds all were flushed from the same ten acre little micro-covert that I got a bird out of last year, in Boyleston. I'm willing to share GPS coordinates on this one. Especially with Pete, if he ever decides to read this blog and realizes this offer is on the table. heh heh.

Well, that's it. Confessions of a grouse chaser.
Posted by Jim Tantillo at 11:24 AM 2 comments: 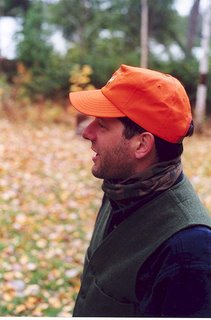 Well we have finaly officialy heard from Joshua verifying his earlier post as mr. "anonymous" and claiming ownership of the "neuron- based database" that lead to the posting of information pertaining to true identification of his puppy. Now that we have settled that it is time to award the secret prize package that was offered earlier. Are you ready for this Josh?

You have won a non transferable gift for two, or more (two legged or four) to a weekend getaway evening a location known to all as "Beer Camp" near Canoga NY. This evening is to be shared with any and all active members of the BC Hunt Club and also includes an honorary membership to the club. This weekend getaway prize can be claimed by contacting either Cabin Boy or myself, to announce when you will be graceing us with your presence. There is no time limit to collecting this prize but I think that I speak for all in that we look forward to BS'ing with you around the campfire ASAP. Congradulations on winning and hope to see you and your cute, cuddly, loveable, little ball of fur soon.
There Keith, I said it for you, so you don't have to and hopefully JT is now cringing on the floor from sugar overdose!
Posted by Ernie at 8:10 AM 5 comments:

We have a winner! 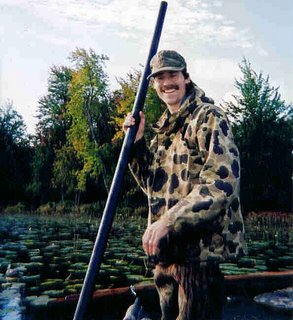 The winner of the game is none other than the infamous Vassili, aka Frank Zappai, JT, etc, etc and confirmed by Little Billy on this weekends attempted goose hunt. Deep in the bowels of the post by Mr. JT, and in responce to Cabin Boys use of the Websters dictionary, Little Billy confessed to being the one in JT's antiquicated photo thus fessing up to being the infamous Kite Killer, aka Bullhead Bill, aka Little Billy. In Bills defence he has graciously replaced said kites with brand new ones that performed flawlesley later in the day of the afformentioned goose hunt. That's right Bill you and Keith left a little bit too early as the geese did arrive and land right in with the new kites you left behind. One bird was bagged for each kite so the landowner is greatfull for the contribution. Vassili now gets a total of 30 points for bringing the identity our mystery guest to light.
Now for a new game! Joshua likes to ask a lot of questions of all of the bloggers, but does not particulary like to respond. "Need Imput- Family Planning" went on with several readers participating with many good comments, 23 in total, despite having to look at the cross dressing racoon with each responce. To that we received only a picture showing puppies with a decoy and the comment as to which puppy would be his. Despite inquiring and enquiring minds requests for information there has been no feedback from Joshua as to breed, name, date of ownership etc. that his fellow bloggers requested. I ask "Wat's up wit dat?" For 20 points can anyone positivly identify the breed in question. There has been speculation, but no confirmation made by Josh to date. For an additional 20 Points can anyone answer Superior Shooters question as to the name of said puppy. To receive ponts you must explain how you received such intimate information from Josh. Finaly 50 points will be awarded to the individual that can identify whatever that creature was in the picture that Joshua posted when he announced "Breed Selected".
Posted by Ernie at 10:37 AM 8 comments:

Since we don't have too gun-dog supply stores in the vicinity, I think I'll need to turn to the infernal "internet" to secure needed training supplies.

Which on-line vendors would you all suggest?

Oh yeah, feel free to mail me any dried gamebird wings (now don't break the Lacey Act!) you might have lying around.

Much thanks.
Posted by Anonymous at 3:19 PM 2 comments:

For a glimpse of just what Uncle Josh might have in store,
see www.boykinsforever.com
Posted by KGT (aka Cagey) at 9:50 PM No comments:

I'll be picking her up the day after I finish working the Federal Duck Stamp contest in Memphis! Very auspicious timing methinks.

She's the sassy one in front.
Posted by Anonymous at 9:06 PM 4 comments:

Vassili has updated his deer sniper blog today for day 66 which includes an account of his latest foray into the meat smoking business. Included is the top secret recipe for "Vassili's Special Blend" summer sausage as well as the smoking schedule for the entire day. Come join Vassili as he monitors the smoker temperature from the comfort of his living room (thanks to the miracles of modern technology) with his Maverick Redi-Check ET-73 wireless remote smoker thermometer.
Posted by Jim Tantillo at 10:33 AM No comments:

This one by request 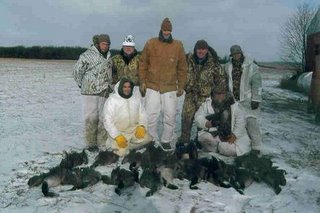 send me your hunting photos

Hi gang. For the last month or so I've been playing with setting up a Flickr account and uploading all my hunting-related photos to the Flickr site. You can set these up as private or public photos, and right now I've got them all set to public so you can see them if you'd like--the web site is http://www.flickr.com/photos/frankzappai .

So far this is just a free account, which gives me 20MB of upload privileges a month, and a limit of three photo "sets," which right now are deer butchering, Kate the Great, and Grouse Camp. If you guys send me enough photos, I'd go ahead and get the "pro" level for 20 bucks a year, which would allow for unlimited uploading and unlimited photo sets. Right now I've mixed in photos that I've taken and also ones that some of you have taken--mainly Andy, Safari Jim, and one or two from Pete. I've tried to give credit where credit is due, but if I've missed any attributions let me know. Also, if any of you has a problem with my having posted your pictures, just let me know and I can either make them unpublic or completely delete them. But my hope is to eventually make this a complete photo archive for all of us.

So please take a look at it, and let me know what you think. These photos will have permanent links to them, so you'll be able to access them and look at them anytime. Just the thing for gifts! Suitable for framing!

Anyway, let me know what you think--and please start sending me photos.
Posted by Jim Tantillo at 8:19 AM 2 comments:

In case you haven't noticed, a change in bag limits ...bad news is mergs now count. Good news is Pintails and Cannies are open through out...

"The daily limit of 6 ducks includes mergansers and may include no harlequin ducks, and no more than 4 mallards (2 of which may be hens), 1 black duck, 2 wood ducks, 1 pintail, 1 canvasback, 2 redheads, 2 scaup, 4 scoters, and 2 hooded mergansers."
Posted by KGT (aka Cagey) at 8:31 PM No comments: