In the half light of the North country.. 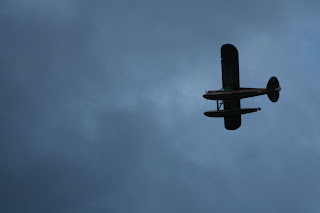 ...lives will be changed. 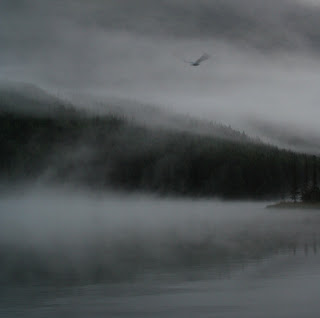 Deep in the pristine wildness... 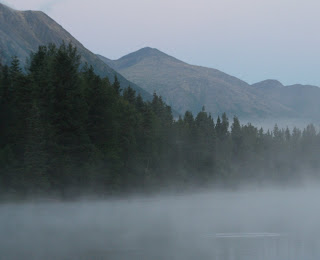 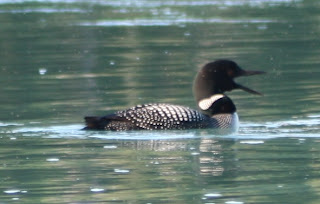 ...amidst the haunting sounds of lunacy 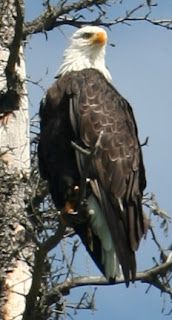 ...and the screeching sounds of death... 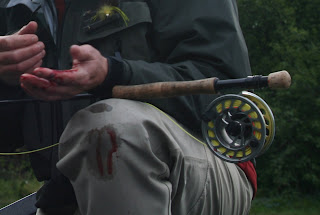 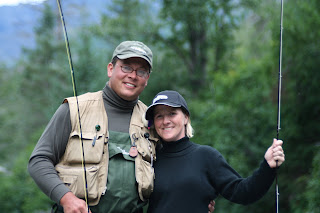 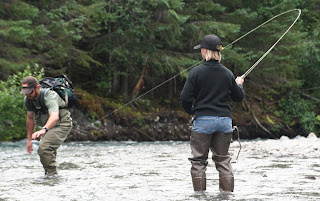 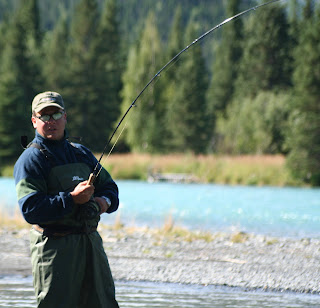 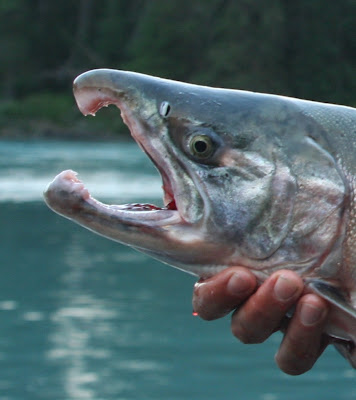 Two minutes in heaven is better than one minute...

Just spent the weekend with a few of the Cayuga crowd. Had a great time with the Vicar, Frank Zappai and their families. I was sorry to have to head back to Happy Valley, but, it's business time!

For more, go to the DOG JUDO website and watch more!
Posted by KGT (aka Cagey) at 5:56 PM No comments: 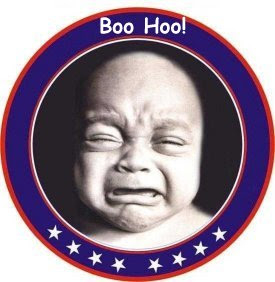 Whats up with all the crybaby name calling, blog name changes and dead deer in the creek stuff? You so lonely in State College that you need to pick on all of the northeners? You were spoken of highly this weekend when we were rebuilding "Double Black" for your hunting comfort when you come up to NY. Must be the weather down south was so crappy this weekend that it made you crabby. I realy liked the old name so could we have it back please? This sounds too much like your digging on your northern bretheren.
Posted by Ernie at 3:44 PM 3 comments: 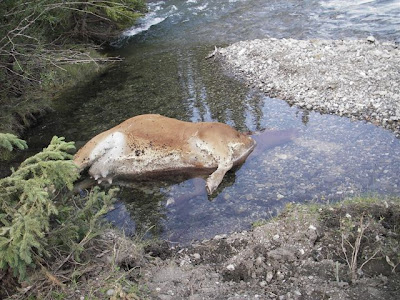 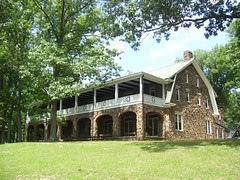 Woodmont Lodge, Hancock MD
Originally uploaded by frankzappai
Back from the weekend in Maryland. Here's the lodge the talks were given at--definitely check out the photo set at http://www.flickr.com/photos/frankzappai/sets/72157601426033731

On puppy training...from my breeder

“You may unfortunately find that your friends and family members will be your worst enemies in regard to making sure your pup is only getting rewarded for behaving politely. They will think you are being “mean,” they will have all kinds of advice, etc. My rule is, if someone cannot abide by my instructions regarding handling the puppy properly, they are NOT allowed to interact with the pup, case closed and hurt feelings not withstanding. I find the people who object to this rule the most strenuously are the ones who happen to have the worst-behaved dogs—and children.”

Some more summertime sniping and reading

I know you fellers don't think all that highly of my woodchuck sniping this summer, what in comparison with Keith going on safari and BC Hunt Club guys trolling for the big ones. 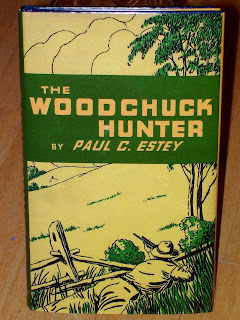 Well, let me tell you--chuck hunting is completely underrated. Take this here book by Mr. Paul C. Estey. Originally published in 1936, The Woodchuck Hunter is a classic work of hunting literature up there with Ortega y Gasset and (ahem) David Peterson. But let's just call him Dave.

Check out this nugget from Mr. Estey:

"In some localities the supply of woodchucks appears as plentiful as ever but it is best to hunt as large an area as possible to avoid shooting out any one section. Where they are constantly hunted they become extremely shy, which only adds zest to the sport. Their curiosity is their undoing and they have not yet learned the range of a good rifle. Even a locality that is partly shot out will contain a few 'chucks that take up their abode in old dens. Sometimes as many as six full grown woodchucks can be secured from one den during the summer. These 'chucks apparently come in from some other section.

"My friend, N. H. Roberts, tells me that some years ago (some forty years ago), four well known riflemen, Harry Pope, Adolph Niedner, Aldo Leopold, and one other man, killed, in Dutchess County, New York, in two weeks time, two tons of woodchucks by actual weight."

So how's that for shooting! I like to think of my own woodchuck shooting as being an integral part of a healthy Leopoldian land ethic.

Anyway, it was a three chuck day here at the ranch. This morning's chuck was an adult whose hole I'd cleared around in the field down by our creek. After watching the hole for signs of life for almost two weeks, I decided to get more aggressive about things and opted to put a stalk on the hole itself. About 8:30 this morning I did a sneak the long way around and came up from the creek toward the hole. Wouldn't you know it--Papa Chuck was hanging out near his spy hole, sunning himself.

I parked my fanny in the folding chair I was carrying and watched him through the goldenrod. 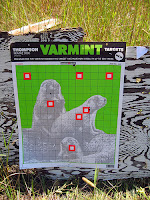 After twenty minutes of that, he hadn't moved, and I was getting impatient. He had me in a bad place--I couldn't move toward him with the chair nor could I get a shot at him from where I sat. I decided to move closer to him under some apple trees and using the goldenrod as a screen.

Leaving the chair behind, I positioned myself behind a decent sized tree and continued to watch him. He was very alert, never moving from the spot he was in, and sniffing the air the whole time. I definitely got the idea he knew I was there.

Again, ten or fifteen minutes go by, and I'm out of patience waiting for him to move to offer me a shot. I decided to make the shot happen and figured out a way to use one of the low hanging branches of the apple tree as a rest. As I'm doing this, however, he ducks down the spyhole, and for then next five minutes or so all I can see is the top of his head--not a good percentage shot. I had about a two inch window through the leaves at his head when he did come out . . . but of course then he moves out into the open, offering a classic broadside shot at about 25 yards.

I'm almost there! thinks I. But wait . . . I realize he's moving away from the spy hole back toward his main hole. I'm losing him!

Quickly I readjust from the two-inch gap in the leaves to a different gap through the leaves. Just as he reaches his main hole, he pauses and facing directly at me, he looks around.

That was his fatal mistake. Drawing a bead on his neck, I let off the safety and squeeze the trigger.

When chucks are fatally shot, sometimes they collapse while their tail goes straight up in the air and quivers. This is what happened here to this chuck--it's a beautiful sight, signifying a shot well done. I've had this happen a couple of times now, and I've also read it described by other chuck hunters. So I watched his tail in the air for a bit before walking over to the hole to get him.

Of course, I find out he had had just enough energy left to paw his way down the hole just a bit--but his behind was still visible from above, and I pulled him out.

Once again, my daughter Sophia was on the scene to record the carnage. No film this time, just photos. Here is her handiwork. 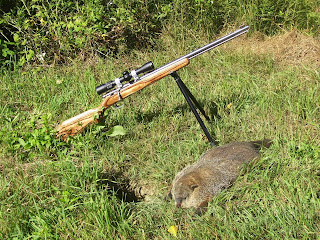 Tonight's action included two more chucks, nothing quite as dramatic as this one. I set up across the road behind our shed and looking out over the neighbor's hayfield. At 5:30 a baby chuck emerged about forty yards away, and I got him with a broadside shot to the vitals. Then after watching a distant chuck tease me from "too far away," another smallish chuck appeared in the grass some seventy or eighty yards away. I watched him for quite a while, and he never quite offered a clean shot. Finally, as he started moving back toward the hedgerow and his burrow, he stood up and offered the classic standing woodchuck shot. I aimed right at his "throat patch," and down he went.

Funny thing about the second chuck was that when I went out to retrieve him, I didn't walk far enough! I'd underestimated the range. I got back to me seat, took another look at where I thought I'd hit him, and then walked the line again ... bingo! DOA, he had simply fallen over right where I'd shot him. Probably my best shot yet of the summer. In some sense, hopefully I'm improving as a chuck hunter. 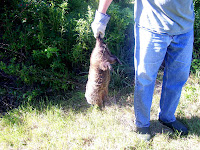