They're saying this is an "epic" advertisement:

If you like that, check out the "making of the epic advertisement" short that the directors put together. The obligatory "related to hunting" blog content occurs at the 1:02 mark:

He shot the fox in the parking lot--with the sunglasses and the hat. Enjoy.
Posted by Jim Tantillo at 8:09 PM No comments:

Match the Grouser best captured with the phrase below with their appropriate longarm companion:

"Aesthetics, sir, are what hunting is all about. Some may call you pompous, arrogant and downright vain ..."

"She (your rifle) probably has a name like Lola, Marie or the always-eccentric Gen. Robert E. Lee ..."

"You’re a weekend warrior. Don’t get me wrong, you love hunting, but it’s a hobby not an obsession."

"You’re a hardcore hunting soldier and your rifle needs to be a tank."

"While your take-it-slow methods may be maddening to the iPhone crowd, you never come home empty handed."

For answers, and a very funny article, click here.

'Twas a great day on Cayuga Lake on Captain George's Miss Lizzy... caught half a dozen or so beautiful land-locked salmon. Most of these were caught in or near the mouth of the aptly named Salmon Creek. But alas, the size limit on Cayuga Lake is 18" and these were all 16 0r 17 inches. The smoker remains idle thus far in the spring trout and salmon season.
Posted by KGT (aka Cagey) at 8:22 AM 2 comments:

Went with me mates to the northern Chesapeake Bay to sample biomass. Heart still heavy with the loss of Cody, I soaked in every moment of that beautiful day. Reborn. Beautiful fish, worthy of the mighty Finger Lakes captain George. 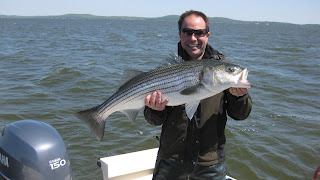 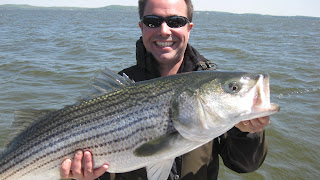 Shades adjusted
Posted by Dr. Dirt at 9:18 AM 5 comments:

Not even remotely related to hunting

The newest dirt on the Hitler parody saga at Outside the Beltway:

As predicted, a Hitler parody of Constantin Film’s move to YouTube to remove parodies of “Downfall” with copyright claims has been made:

Warning: The language is decidedly NSFW but, then again, it’s just text.

And, for once, “Hitler” and I are in complete agreement. DMCA gives way too much power to those who issue copyright infringement claims. Even when there are clear Fair Use rights, most of us have no choice but to pull material off our sites. For one thing, the law basically forces hosting companies to shut down sites that don’t comply. For another, it’s simply too expensive and time-consuming to fight it in court. By the time the court ruled in our favor, we’d be broke and the content in question will long since have passed from public interest. But, as “Hitler” points out, Google isn’t like the rest of us. They host their own content and have deep pockets and, one presumes, lots of lawyers.

Then again, as Ars Technica’s Jacqui Cheng notes, Constantin didn’t actually use a DMCA takedown but YouTube’s own ContentID system.

This, of course, allows copyright owners to go as far as they want. If they so choose, they can flip the switch on everything they don’t like—even if the clips otherwise constitute fair use—and watch the videos disappear. The EFF has publicly hammered YouTube to tighten its ContentID requirements, but the company seems content to let copyright owners themselves determine what’s OK and what’s not. All users can do is submit a dispute through YouTube.

This system suits YouTube’s needs well, since it not only keeps them out of court but, more importantly, allows them to keep copyrighted content on their site in most cases. Despite the site’s origin as a place for amateur videos, it is mostly presentations of copyrighted material. Still, in the cases of the Hitler parodies, it’s pretty clear that we’ve got fair use.

The legal merits of Constantin’s argument are clear: They do not exist. Downfall parodies take less than four minutes of a 156-minute film, and use them in a way that is unquestionably transformative. Maybe Moturk49 was somehow making a ton of money from his or her Xbox-related parody, but it seems unlikely. In any event, the Supreme Court’s 1994 decision in the “Hairy Woman” lawsuit established that the commercial nature of a parody does not render it presumptively unfair, and that a sufficient parodic purpose offers protection against the charge of copying.

Not that that will matter. The issue is YouTube’s kneejerk takedowns. The site is free to do what it likes; nobody will bother going to court over something so ephemeral as a Hitler joke; and though YouTube is obviously the best and most popular forum for any video, it’s not like there’s some inalienable right to run your content there. Still, the use of immediate takedowns is a blunt instrument that YouTube and its owner Google will, I hope, learn to refine in the future. Meanwhile, brand-new Downfall parodies, including the inevitable Hitler-issues-DMCA-takedowns version, are available elsewhere.

The bottom line is that people don’t have any inherent right to post content on Google’s servers and they’ve decided that they don’t want to fight over this issue. And, unless this drives users to start using sites whose owners show more willingness to defend this sort of thing, there’s no harm to them for caving in, since people will naturally direct their anger at Constantin, not YouTube.

So there's absolutely no question in my mind that the Hitler grouse camp video is, ahem, fair use. So take a stand for truth, justice, and the American way. Support your local Hitler parody video.
Posted by Jim Tantillo at 7:09 AM No comments:

Labels: First Ammendment, freedom of speech, hunting--posts not even remotely related to

Looks like our illustrious Ethicist-in-Residence might have engaged in a nefarious international criminal activity ... or did he?
Attack on Hitler parodies now newest front in copyright wars
Posted by Anonymous at 9:13 AM 1 comment:

This just in from Minnesotans for Global Warming:

Washington, DC -- Penn State University's Michael Mann, one of the central figures in the Climategate scandal, has threatened legal action against Minnesotans for Global Warming (M4GW) over the group's popular satirical YouTube video "Hide the Decline." The No Cap-and-Trade Coalition, a group that includes M4GW, responded today at an event at the National Press Club, releasing Mann's threatening letter and an updated version of the "Hide the Decline" video.

"We understand why Michael Mann is eager to silence public discussion of the hockey stick scandal," said Jeff Davis of No Cap-and-Trade, "but truth is an absolute defense."

The original "Hide the Decline" video, which had more than 500,000 viewers, was removed today from YouTube by M4GW's Elmer Beauregard. It received national attention when Rush Limbaugh played it on his radio show and was later featured on CBS Evening News in the wake of the Climategate email scandal. "Hide the Decline" parodied Mann, the Penn State professor who is largely responsible for the creation of the now debunked "hockey stick" graph, which purported to show a dramatic spike in average global temperature during the 20th century after 900 years of relatively constant temperature.

The video spotlighted a phrase from one of the central "Climategate" e-mails in which the University of East Anglia's Phil Jones explains how he used Mann's "Nature trick" to "hide the decline" of key temperature data. The hockey stick graph relied on "hiding this decline."

When asked why he removed the video, Beauregard said "Right now, the last thing I need is a lawsuit. I can barely afford my electric bill." Beauregard recently converted M4GW's world headquarters (a recreational vehicle parked in Northern Minnesota) from propane to wood heat. "Mann should be glad to know that we don't burn fossil fuels anymore -- just trees," said Beauregard.

"M4GW was started to poke fun at Global Warming because I knew it was a joke, it's hard to believe in Global Warming when you live in a place like Minnesota. During last winter we all wished we had some global warming, hence the name of our group," said Beauregard. As global warming developed into a political issue, M4GW has tried to educate the public that CO2 is not harmful but part of the natural carbon cycle.

Minnesotans for Global Warming did comply with Mann's cease and desist demand, taking the "Hide the Decline" video down from their YouTube account and webpage. The No Cap and Trade Coalition unveiled a new video they're calling "Hide the Decline 2," however. It was screened at a press conference on April 20th and is available on YouTube and NoCapAndTrade.com.

"I hope Dr. Mann does sue us," Said Davis, "The legal discovery process would give us an opportunity to expose Dr. Mann's research - or lack thereof to public and legal scrutiny."

When asked about the situation, Chicken Little said, "I used to believe in global warming -- of course, I used to believe the sky was falling too, but Elmer set me straight." Chicken Little went on to say, "I think it's horrible that Elmer had to take down the video. Can't a person have a little fun on YouTube anymore? Those Global warming guys sure don't have any sense of humor."

At the press conference, the No Cap-and-Trade Coalition handed out a historical review of the hide-the-decline controversy entitled, "Michael Mann: Defamed or Defined by Hide-the-Decline?" as well as mini-hockey sticks that read "Mann-Made Global Warming: Why We Should Be Worried About the Intellectual Climate."

Fortunately you can still see the video, which has been re-uploaded numerous times:

For Keith: climate change will affect hunting. And the blood sports. And pickerel fishing. So there.
Posted by Jim Tantillo at 6:33 PM 1 comment:

Cody, sweet Cody, succumbed to kidney cancer today. Ever compliant, she was a wonderful companion, a patient, passionate retriever, and a great family member. We were fortunate to see her grow into an old dog, deaf and content. She lies in sweet, sandy loam, head resting on a decoy. 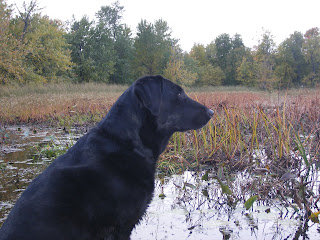 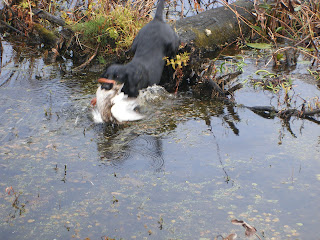 A retrieve later that morning.
Posted by Dr. Dirt at 6:19 PM 9 comments:

Cornell: Not Just a Basketball School

Here's a newsworthy item relayed to me yesterday by Path Walker, who apparently is too shy to blog these things himself but happy to birddog them up for the rest of us. From the Cornell Chronicle:

Henry Asante, Faisal Mahmood, Chen-Tsuo Yen and Chris Tupino, all class of 2001, designed the shotgun for their master of engineering project. They did it entirely in ProEngineer, a computer-design software.

Ithaca Gun, an Ithaca fixture since 1880, ran into financial trouble soon after the students completed the design, and the company assets were sold in 2007. The students had graduated, and they assumed the gun would never actually get made.

Now based in Upper Sandusky, Ohio, Ithaca Gun recently informed John Callister, the students' faculty adviser, that their long-dormant designs were to become reality after all.

"The folks in Ohio called me and said they were hoping I still had the computer files on a disk," said Callister, senior lecturer in mechanical engineering and operations research.

All the parts, including the breech block, receiver, slide, carrier and trigger plate, were designed by the students. Dimensions and tolerances were specified to within four decimal places -- possible because of the students' precise calculations.

"It's heartening to see it's actually happening after all these years," said Tupino, an industrial engineer at Northrop Grumman Corp. in Baltimore. He says he keeps a copy of the design report in his desk at work to this day and still gets asked about the unusual project.

Callister said the project started because the company's marketing manager at the time wanted to expand the product line, but in a way that wouldn't disrupt manufacture of existing guns. That's where the students, whose majors ranged from operations research to mechanical engineering, came in.

My thanks to Andy for the info. Let's all get out our checkbooks today.
Posted by Jim Tantillo at 1:14 PM 2 comments: