Turkey sandwich and a side of newts 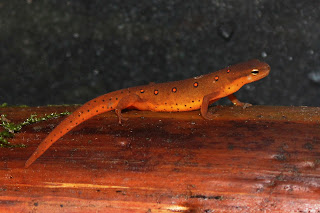 Okay, efts -- red efts (newts when they're grown up spawning in a pond). In the spring they're everywhere moist in the turkey woods when the humidity is right.  Vicious predators, prowling around the forest floor putting fear into the hearts of small invertebrates. Definitely a highlight of turkey season.
This turkey season started late for me.  I did my usual scouting from the kitchen, but didn't pursue any gobblers I saw during the first two weeks of the season (other than an eventless ramble on Michigan Hill), as I didn't want to thin out the herd before my father-in-law came to hunt with us Mothers' Day weekend.  Mothers' Day morning Angela and I wandered the woods together, listening for gobblers.  We heard two, in different directions, and decided to try to get close to the nearer of the two.  We snuck closer, being careful not to squash any marauding efts, and set up above the gobbler in a mixed hardwood stand. However, right from the start an unseen jake seemed to give us the ugly eye, or at least ugly clucks, and he and the other gobblers drifted away from us.
We picked up and circled around ahead, and set up again.  I gave a few yelps, clucks and purrs on a slate.  An excitable jake, perhaps the one with the ugly eye, was interested but the longbeard hung back.  The jake came in to within gun range -- and if I had my gun up I would've had the shot.  But I was calling, not shooting, on this one.  Ange was all set to shoot, but a tree completely screened the jake from her view.  One more step forward would've given her the shot, but his next steps were a hasty retreat.
This band of gobblers continued their way through the woods, so again we tried to circle around ahead.  Ten minutes later we stepped into a nice open hardwood stand at the top of the ridge and decided it would be a good place to pause and call.  A couple yelps on the box call were answered immediately by gobbles from the same birds.  We settled in, each against a nice mature hardwood, facing down slope in the direction of the birds.  Ange was to be the primary shooter, positioned ahead and to my left.  A few clucks on the slate were answered immediately by gobbles, louder than before -- they were on their way... 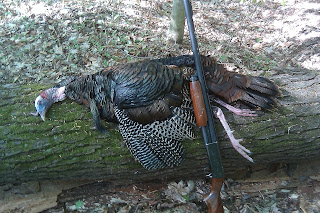 And then another gobble, closer still, but... behind us.  Quickly we shifted around to the other sides of our respective trees.  Cluck-purr-cluck from the slate was answered by a gobble to our "new" front, and then by a gobble from behind!  Now I was in the front shooting position, and Angela was behind me to my right. Another set of gobbles -- from front and rear -- and soon I could see a lone gobbler in full strut about 40 yards out front.  My gun was up, hoping he'd close the distance before the birds got to us from behind.  They had us sandwiched -- ideally we would've been facing in opposite directions, but it was too late to move now. The gobbler out front stepped closer in half strut, looking for us, and gobbled. I could hear the foot steps of turkeys behind us.  The gobbler took two more steps, and "pow!" -- I popped him in the noggin.
I turned to Angela, and 3 or 4 gobblers, all within shot of Angela, took to the air behind us. The gobbler turned out to be a two year old, 15 lbs, his breast meat grilled up nicely for supper that night.

A week later I took a dark and early walk in search of another turkey.  The efts were out and about, and the bird song was loud -- scarlet tanagers, wood thrushes, black-throated blue warblers.  But the turkeys were silent.  I walked, stopped, and listened -- without calling -- for about an hour.  I crossed a mature hardwood ridge that had sign of recent turkey activity, thought about stopping to call, but decided to continue a little farther to where the side of the ridge falls off steeply to the hollow below.  At the edge of the ridge I listened for a few minutes... and I heard a gobble from the hollow.  It sounded pretty far away, but I figured I'd sit down and see if a little calling could lure it up my way.
As I looked around for a comfy spot to sit I heard another sound that froze me -- it sounded like the cluck of a turkey, and not far away.  In fact, close, almost too close.  I quickly sat down against the best tree I could find in short order, put on my camo gloves, pulled up the face net, and covered my legs with a camo net.  I popped a call in my mouth, and then pulled out the slate and struck "cluck, cluck".  Immediately a double gobble boomed out, and it couldn't have been 40 yards away.  I got my gun up... and waited.  I could hear rustling in the leaves. A few minutes went by.  Carefully I reached behind, into my vest back pocket, and slowly pulled out a turkey wing and brought it to the ground.  As I scratched the wing in the leaves I gave a couple clucks, actually a "keeee-cluck-cluck", on the mouth call.  A tom gobbled, jakes clucked, and feet scuffled. Pretty soon I could see gobbler heads bobbing through the undergrowth.  When a jake got close enough, I squeezed off a shot.  At least 4 gobblers took to the air as one flopped on the ground.  And we had the fixings for another meal that just couldn't be beat -- turkey veal. 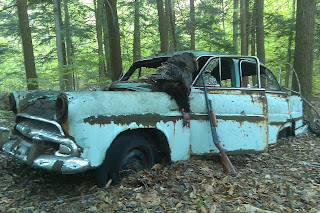 On the way home I stopped to photograph this bird with one of two junk cars that had survived being salvaged for scrap on a neighbor's woodlot.  I don't know why they weren't taken away with the rest.  These were the only two Hudson Super Jets in the bunch.  Apparently early 1950s vintage. 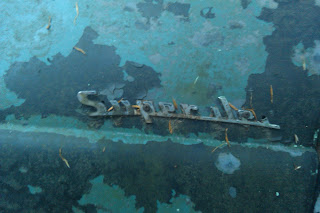 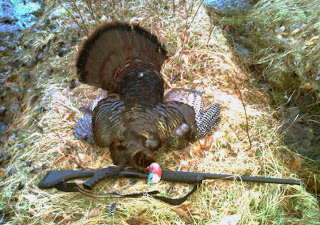 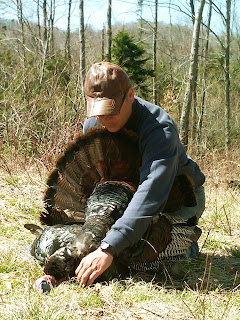 Today, you are a man. Mazel Tov!