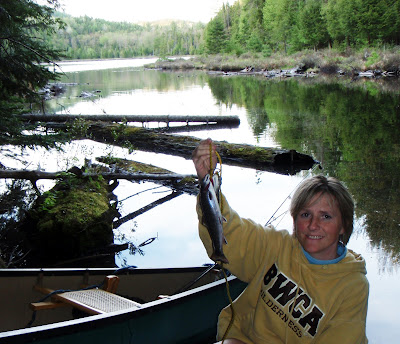 So, I will be posting a more complete report on our family outing in the ADKs on Farm, Fur, Fin, Feather soon. We canoe camped in the Paul Smith's Brook Trout Management area, just north of the St. Regis Canoe Wilderness . We focused our fishing on Black and Long Ponds. According to Fishing Eastern New York by Spider Rybaak, both were reclaimed with chemicals in 1997 and now support Windfall-strain brook trout indigenous to New York. The 73-acre Black Pond is completely surrounded by forest and has an esker running along its west bank. Its average depth is 20 feet and the maximum is 45 feet deep. Spread over 14 acres, Long Pond is completely surrounded by forest, shrubs, and wetland. Averaging 9.5 feet deep and dropping to a maximum depth of 20 feet, it feeds Black Pond. Two dams—one at the canoe launch on the pond’s outlet, the other on the channel halfway to Black Pond—prevent fish movement between the two.

As Many of you know, Mo was injured 10 months ago. This trip was important for her in that it was her opportunity to push herself and simultaneously assure herself that she is no longer "broken." She seems like a new person after the trip. As Rich has said, God Bless the 'Dacks.
The film clip was shot June 24th, 2010--- ten months to the day from her accident. Solo canoe fishing, paddling in the Adirondacks, sleeping on the ground. I'd say she's back. Mark July 24th, 2010 on your calendars--- we are throwing a BIG party.
Posted by KGT (aka Cagey) at 7:20 AM 6 comments:

The Most Depressing Graduation Speech Ever 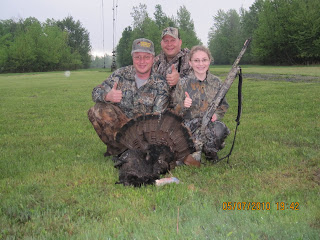 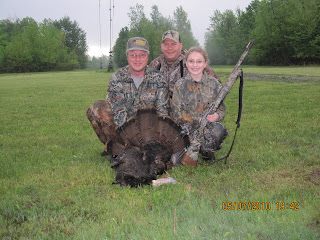 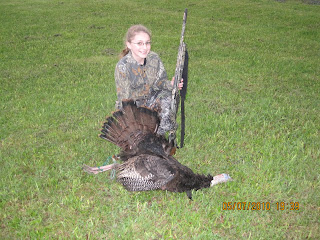 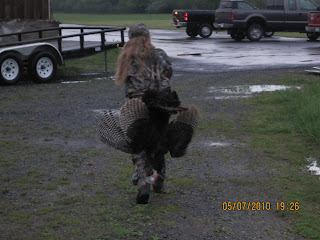 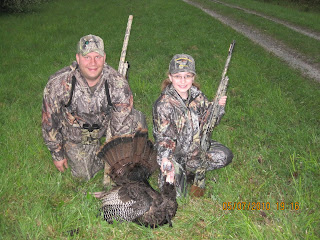 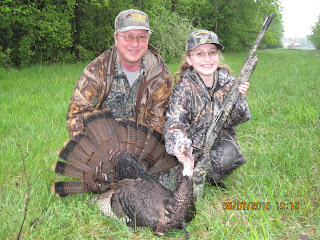 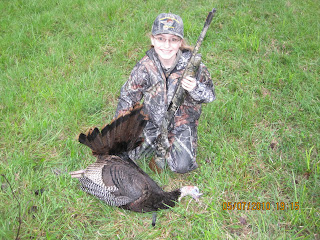 May 8th Danielle turned twelve and was able to start hunting,to say the least I was very excited. we did some scouting around my shop but the turkeys were not active John was nice enough to invite us to hunt on the base so we planned a birthday hunt with John.You cant buy your license until you turn twelve so since I could not sleep anyway so I went to the shop at 2:30am and purchased Danielle's license a perk of being a license issuing agent. Danielle got up at 4am we got prepared for the hunt and were in the woods by 5am. It was a beautiful morning the turkeys were gobbling, grouse drumming and deer moving we had a great morning. turkeys gobbled alot on the roost we called a little to let them know we were there after they flew down it got quiet but we waited and kept calling and at 7:15 a hen showed up to our rightand a red head following her then another red head adrenaline started flowing we needed to reposition to get the shot I slowly moved back and got Danielle's gun pointed in the right direction John slid Danielle around and we were ready the hen and first jake went by and got behind a tree then the second jake came into view so Danielle took aim and had to wait for him to put his head up he lifted his head and then dropped it again darn we have to wait then up came his head and BANG Danielle's first turkey and first kill wason the ground.A perfect shot head and neck it was one of my proudest moments and a memory I will treasure forever. Well enough talk check out these pics.

Take a kid hunting! See you in the field. Eric and Danielle
Posted by Eric at 9:07 AM 4 comments:

Why Jim's rifle and related exploits pass the smell test 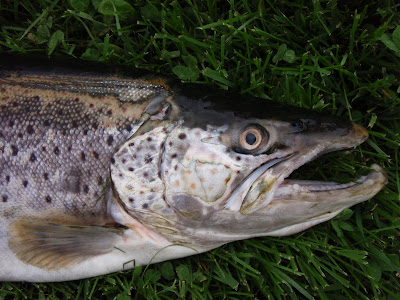 No turkey so far, but some protein nonetheless.
Posted by KGT (aka Cagey) at 2:18 PM 2 comments:

Photo might be a fake: the presence of the open bolt, with the fox still looking into the scope, indicates this could have been staged.

Maybe the fox placed store-bought bunnies on the ground in an attempt to pass them off as his/her own trophies?