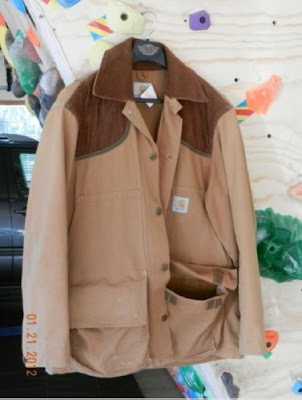 Orange in a can

I appreciate the concern about my attire from brother grousers Kleinpuppy and Path Walker. Although somehow I missed the subliminal offer to buy me a new vest that Andy picked up on in reading between the lines of Pete's post . . . therefore I assume I'm stuck with the same old same old for the next ten or twenty seasons. (also forgot that Pete was there when I bought it new--Famous Brands, where else? and seeing as how Josh and I took hunter ed together in 1993, the vest is circa 1993.)

Here's how we rectify the faded-old-and-no-longer-legal-blaze-orange dilemma. The Filson Company's orange in a can: 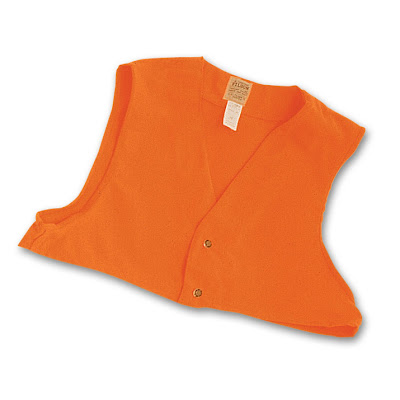 When I'm hunting solo, I sometimes skip the new orange; but when I'm with some tree-swatting, covert-stealing flatlander from Pennsyltucky, I don my Filson orange in a can, and I'm good to go.

Grouser Looking for a Sponsor

Seeing Jim's faded vest in the photo with Phoebe - the same vest I helped him purchase c. 1995 - I realized that what he really needs is a corporate sponsor.
I don't consider myself to be a gear guy, but I do love my Badlands vest from Uplander's Warehouse. The ergonomic suspension system rides perfectly during long, grouseless trecks through the Pennsylvania woods. The game pouch can handle all the treed fool hens a man can shoot in the early Maine grouse season. My vest even has a slot for a "hydration bag" to slake the thirst that comes with missing grouse after grouse in northern Wisconsin coverts. And, the vest is extremely versatile. It'll handle timberdoodles too. 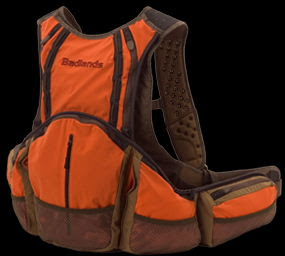 Bobby, my neighbor, and I made my annual hajj from central Pennsylvania to Mecca for the late goose season that the New York grousers know so well. I had wanted to introduce Bobby to this unique form of hunting, something he had never experienced in over three decades of Pennsylvania hunts. Despite sub-par weather conditions (perfect for spreading manure… but more on that later), Bobby came out of the experience, in his words, “hooked.”

Keith, Mo and the kids served up incredible hospitality, smoked appetizers and, manicures. Yes, Victoria’s Paradise Spa is open for service, with rates so low it was impossible to leave without a few French nails and a painful eyebrow wax. Service was the theme of our visit, enough to make a visitor ashamed of the inadequate preparations he had made for Keith’s Pennsylvania deer visit earlier in the season.

Keith and Eric had scouted hard prior to our arrival. Canada Geese were relatively scarce – warm weather scrambling migration patterns - and the birds that were around had not been flying much. A brief cold spell brought a partial dusting of snow, just enough to preclude the use of the layout blinds but not enough to allow for snow camouflage. Compared with past years, things weren’t looking good, at least by our guides’ standards.

Our first day of hunting offered some of the best conditions of this year’s late season. We camped in an island of brush, visitors positioned in the best shooting cover, guides huddled under an obtrusive tree. The guides conferred over the best configuration for the decoy spread. All contributed to setting the many dozens of decoys: nodding full bodies, flocked shells, the occasional blue goose pair. Bobby marveled at the innovation and the investment.

The Canadas were late to fly. The first few flocks to visit our field were suspicious of something. Hypotheses were rendered. Decoys were reconfigured.

At long last a pair descended into easy range. The Pennsylvanian’s unloaded blunderbusts. I recall shooting at one bird, watching it fly a few beats, then surprised as it dropped, stone cold dead. Only then did I take note of the shot that had followed mine. Even trapped under a tree Keith wasn’t going to take any bird for granted.

For the remainder of the day, birds arrived at regular intervals. Large flocks would not be decoyed close enough to pinch. Smaller groups succumbed to our shots, more often than not. At one point a lone bird flew around the brush island. It was high, more than 50 yards above ground. “Take him,” whispered one guide to the other. An audible click, 10 gauge safety switched off, followed by a roar. I looked to the heavens and the bird actually dropped into my field of view. The fate of Icarus. It was a singularly impressive and memorable moment. Smoke wafted from Eric’s gun. Pride emanated from the gun’s owner.

We racked up the birds. Ten in the bag. Everyone was able to lay claim to at least two. Easy cleaning at Kuneytown on Eric’s tailgate. 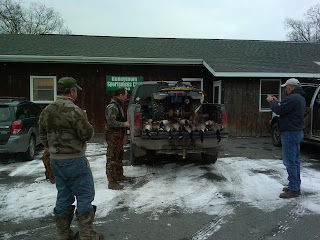 Scouting at day’s end didn’t come as easy as did the bird cleaning. The guides worked their phones and drove down roads following hunches. No good alternatives to that day’s field could be found. So it was that we decided to return to the site of that day's success.

Day two brought Rich, force of nature. Day two also brought an unwelcomed odor (no relation to Rich but also a force of nature). We had been watching manure spreaders zipping from barn to fields at the end of the previous day’s hunt. Even with a hard freeze it was clear that the ground had changed from yesterday's condition: 8,000 gallons of frozen porcine waste now plastering its surface. With wind from the south and a late start, we had little choice but to set the "spread" on the brown frost.

There are times when we use the term “blue bird day” euphemistically. This day - clear skies and very light southerly breeze - brought bluebirds to our feces glazed field. No Canada Geese. We watched flock upon flock of snow geese travel by. We made wonderful conversation. We lamented Rich’s absence the day before the manure had been applied. The day BEFORE, when the Canada Geese actually FLEW from their lake roosts to the grain fields. One Canada Goose did eventually investigate the stench, but it changed its mind when a hail of steel frustration shooed it away.

With the sun came the thaw. Not a welcome thaw. A dangerous thaw. Trips through the decoys became hazardous, slick slurry blanketing the once frictional surface. Olfactory senses overwhelmed all others as the atmosphere became more and more pungent. In the miasma hunters became light headed.

We weighed options. Rich developed ever more concern over work he had abandoned at the office. We worked ever harder to focus on the wonderful camaraderie we shared. 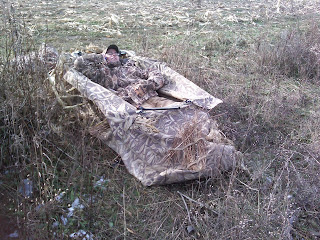 Rich, searching for an escape back to the office

By the time we decided to cut our losses, the flock of decoys - once proud replicas of migrating avian magnificence - had taken on the rime of a swine lagoon. Decoy collection involved strategies seldom considered when waterfowl hunting. How to optimize travel between decoys? How to stack the decoys so that only a few, sacrificial shells contacted the fetid earth? When Eric returned with four wheeler and trailer his tires issued rooster tails of rancid muck. 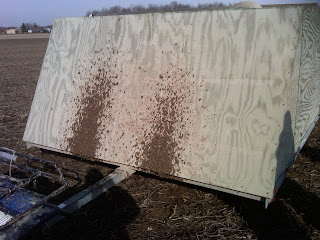 We walked back to the vehicles, marveling at the misery of this warm, sunny day. New Yorkers weighed the costs and benefits of cleaning older decoys. Pennsylvanians considered excuses for abandoning the gear they had worn that morning, if only to improve the car cabin air during the four hour trip home.

For the New York grousers, these two days of goose hunting may very well be ones they would soon forget, or would wish that they could forget. For the Pennsylvania grousers, the indelible memories of these hunts left no doubt that they would return in a year’s time. Regardless of the manure spreading conditions. 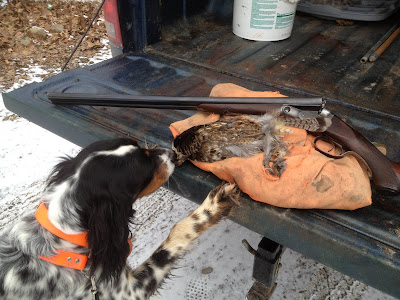 Posting this for Jim Caron, who bred Phoebe's sister this fall:

Any chance I could talk you into posting the attached photos of the last male pup I have available on your Grouser’s blog site?

All of his brothers and sisters went to new homes this past weekend but his prospective new owner decided at the last minute the timing was not right for him. I would be happy to send pedigrees, hip results for dam and hip/elbow/eye and thyroid results for sire. This little guy is 8 weeks tomorrow (1/10) and he‘s ¾ Llewellyn (sire is 100% registered Llewellyn with FDSB). My e-mail contact info for anyone with questions is jacaron@fast-air.net I could partially deliver him as far as Lansing on Feb. 6th if that would help someone who may be wondering how to arrange to get him.

The litter has been registered already with FDSB and he has first shots, dew claws removed and wormed. He will be a hunting machine by this coming Sept. and I’ll bet he will back his Aunt Phoebe.

I’ve also included one photo of his mom, my Daisy, after a short hunt around the house this past Oct. when she was 4 weeks pregnant. A solid memorable point on a grouse under a spruce that I proceeded to miss (followed up and got it though).

Thanks and feel free to send any photos you may have of Phoebe working the brush.

So here are the pics, let me know if any of you are interested. 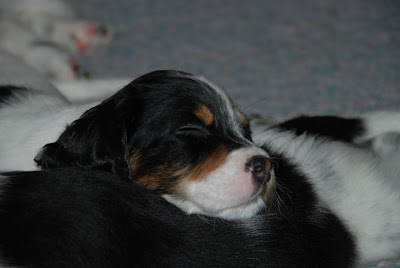 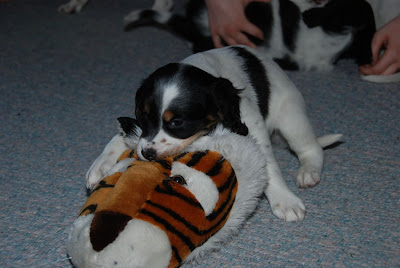 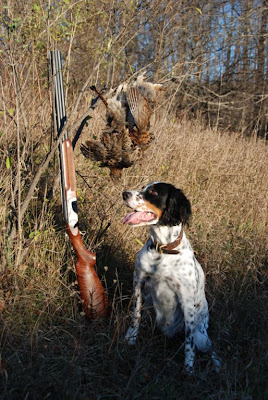