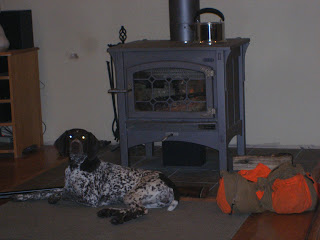 Cozy winter memories
Seven am and I'm off to a training session/grouse hunt with my little pointer in the fresh fallen snow. This image captures everything about the hunting season that I love. There's something timeless about what we do boys. Perhaps I'm succumbing to some early Thanksgiving sentimentality, but I feel blessed. Off to the grouse woods...
Posted by Dr. Dirt at 6:54 AM 2 comments:

Still Recovering From the Sock. But Stella Doing Great.

Stella, Nos and I spent some time in the woods this past weekend. D.C. - despite the abundance of game ('specially donkeys and elephants)- still is without a hunting season, but I can still take the dogges out for fun and some training.
Stella looked good searching for the "dead bird" (which I threw into the woods when she wasn't paying attention), and did a nice job retrieving to hand. She also made some water retrieves, too.
So, at least we got that going for us. 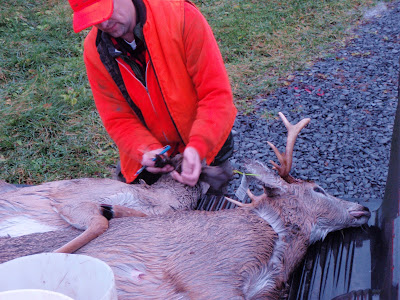 Started the morning out at “the club” (Kuneytown): I wanted to start getting to know this property better. I know one spot really, really well now. Cagey and I had looked at some maps and found a nice pinch point between an E/W pond and a N/S hedgerow. Deer had to move through there when people were moving them. I hunched down behind a ground blind at 6:15, and waited in the rain. And waited. A smattering of shots in the distance; nothing close enough to raise my hopes. The rain continued. And then it rained some, followed by some rain. Nothing. I waited. Rain. Quiet. Rain. Cagey called. He had a nice 11 pt buck. Yes!! It rained. I saw a squirrel. And then perhaps 45 minutes later, a crow. It rained. I heard one goose honk. I didn’t move. A river ran down my neck and then my pants. Cagey called again. About noon. He was done tagging and dragging, and would I meet him at the club for breakfast. Yes, I would. After some sausage, taters, and eggs, a measure of vigor was restored.

Time to redeploy! Keith took mercy on me and suggested I sit on the new stand (my old portable) at the S end of the gully at Canoga Creek Farm & Conservancy while he took his buck in for processing. Yup! Great spot; not for those afraid of heights. Even loaned me his slug gun, he did. Rifle sights and non-jamming; both good things. Settled in. Still raining some; not as much. What’s this? 2 does trotting up the gully from the south! Justice served from the 6 pointer I passed up last year (as per QDM directions) that died 15 mins later on the self-same property to the south). They stopped in some whippy brush at a bend of what Cagey says is called “Yellow Ck” (a trib to Canoga). I prefer to think of it as the Tidball Fork of Canoga Ck. About 60 yards; steep downhill. But standing, broadside. The bigger deer more open than the smaller. Held on her shoulder, touched her off, and down she went. Stumbled, fell, regained her feet, and lunged through the brush about 30 yards and then was still. Gave thanks, reflected a few moments and called Keith: still at the farm; we now had two deer to take for processing. I floated her down the raging creek—up to my thighs—I could have been swept away in the torrent to certain destruction!!!, but couldn’t really get any wetter—to where Keith took the 4 wheeler.

Time to relax, to bask in the glow of “to have hunted”. A mellow trip to the butcher, some good-natured ribbing by the boys there about the quality of the deer gutting by these Cornell types (fancy tools only work if’n you remember to USE ‘em). Even the rain letting up, beautiful orange glow suffusing the water vapor (the earth is about 98% water rather than 70%). Life is good….hey, what’s this???!!! A huge 9 pt buck in the field?! Cagey had his shotgun, I had 2 random slugs in my pocket. “Do you want him?” asked my Professional Hunter. Uhm…yeah…why wouldn’t I? But I felt strangely detached—transition too abrupt from mellow to predatory. We pulled off the road and did a hasty sneak across leased lands; me fumbling to load a weapon totally new to me. Crab-walked up a fencerow. As my Professional Hunter had known he would be, the buck was in the corner. This was my chance. How the **** do you take this thing off safe and turn on the red dot scope???! Knelt and took aim at about 80-85 yds—a long shotgun shot for me. Touched it off. In replaying this the next morning, I can laugh a little: I jerked my head up from the stock to watch that buck fall—like a golfer looking up to watch his drive and missing entirely—but of course he did not fall. Nor did he run away. Just stood there. I still felt strangely arms-length about the whole thing. This deer was huge, and he was still standing there. Did I have another slug? I did. Should I put it in the gun? I suppose. Why not? I belly crawled another 5 yards, put the dot on the top of the bucks spine, and touched trigger. This time, perfect. And the deer again just stood there and I was out of shells, out of luck, out of time. What a helpless feeling. Off he ambled, and we walked back to the truck, quietly. In thinking about it this morning, I didn’t get that deer because I somehow just couldn’t quite get back into predator mode: it felt too easy somehow, I was too mellow, and I couldn’t yank myself back into the moment. Cagey was very kind to me: he has seen—and felt—this kind of thing in Africa. Chances come quickly, and they go quickly. A very good opening day, and lessons learned.
Posted by Vicar(ious) at 9:12 AM 2 comments:

Rich and I had a great opening day...there are good stories to follow.

Click below on the picture for details on the buck.

Veterans Day, 2008. I honored our heros with a day in the Pennsylvania woods, hoping the woodcock had preceded our recent cold front.

9-1
First to Cobert Covert with Lilly. Conditions were cool (40s-low 50s) but dry. Nothing. At 10 we tried a new covert on a south facing hillslope managed by Penn State. Lilly pointed a grouse (reflush) but bumped it as I fought the underbrush trying to get to her. Then, a one hour Bonasa hiatus. Just when I thought we were done, as I emerged from pine plantation to a 20 ac clearcut, I flushed a bird into the open by almost stepping on it. I was not "in the moment" so I rushed the shot. I thought I'd clipped it. Lilly is a delight to watch when she is hunting dead, but even her heroic efforts couldn't make one materialize. I was less disappointed than I was confused, but I was able to regain my composure and a semblance of calm for the budding pup. From there, we scouted the slopes of Tussey Mountain, tried our hand at a covert that is best in January after the snow has settled, then headed home for lunch and Cody.

2-5
The infamous grouse research plots are now open to hunting. This is the land of popple, and ticks. I alternated the dogs. An initial treck with Lilly, too close to a firing range, turned up nothing. I relocated the truck, disconcerted by the number of vehicles parked at every likely looking patch of cover. Another quick excursion, this time with Cody, and I was ready to call it quits. Conditions were bone dry. Ticks were crawling all over the black dog, dozens of them. We ran into a pair of bunny hunters, exchanging information: bunny hunters had seen no bunnies but had bumped many woodcock; tick-covered bird hunter had seen not birds but had bumped two bunnies. We pressed on, eventually finding a large stand of aspen with a fairly thick undergrowth of miscellaneous eye swatting bushes.

In minutes we flushed our first bird. I dropped it and Cody quickly found it, mouthing it a few times but unwilling to pick it up. It was an enormous bodied adult female (Andy would probably ID it as a hatch year male). Bodacious and blond. We soon flushed several more birds, but the understory was too high and thick for me to make much of the opportunities. More importantly, Cody became quite disoriented, losing me several times and unable to locate me when I called her. So, we returned to the truck and I brought out a thoroughly tired Lilly.

Within several minutes we flushed our first bird. I don't know who did the flushing, but I decided to shoot, cleanly missing with the right barrel. As the bird disappeared from range I pulled the rear trigger and the bird stopped it's progress, descending to the earth in a controlled, sitting position. We hunted it dead but Lilly immediately bumped a woodcock. Was it our bird or another bird? Lilly is regularly bumping woodcock. I've been told she'll figure them out eventually. We bumped four more birds and I did my fare share of polluting the environment with lead, briefly forgetting that I was in training mode. Bad Pete. I leashed the dog and stumbled back to the truck, ticks dropping from every branch we passed.

We returned to site of the potentially lost bird with Cody and Lilly. They both hunted the dead bird with enthusiasm, and suddenly there was a flush. A clearly injured woodcock rose and flew over my head. You could see it losing steam and, within 10 yards it simply dropped to the earth. The two dogs were on it and Lilly promptly brought it to me, refusing to release her prize but technically delivering to hand. I was elated, vindicated and redeemed. We returned to the truck where I spent fifteen minutes removing several dozen ticks from each of the dogs. At home, I removed another 50 from Cody alone. Vive les ticks! 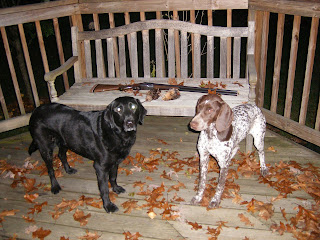 Night-life at camp is, of course, important. As important as the hunting itself? Depends on how good the hunting is and how bad the dinner and musical entertainment. Luckily for us the hunting was just fine, the food lovely and the music good enough (my banjo playing brought down the quality level some, but I hope not too much).
Dr. Dirt arranged a wonderful lobster meal the first night. We enjoyed the fermented fruit of the fields and vines each night, which also served to loosen up fretwork some.

In the photo below we see the Perfesser pushing out the tunage, Cagey  taking a much needed liquid break, Dr. Dirt dreaming of bog-suckers shot over Lily and PW customizing his official "Ethics Inaction" hat (thanks to Jefe for those!). 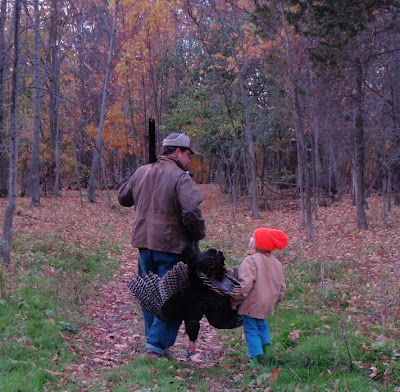 Click the picture for the full story.
Posted by KGT (aka Cagey) at 11:23 AM 2 comments: 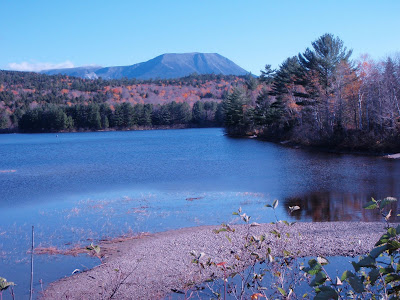 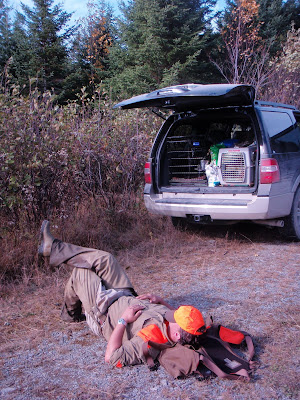 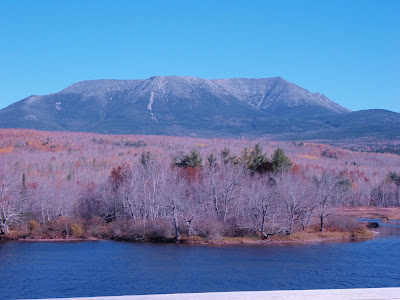 The Lady of the Lake

One grouser is designated to conduct a ritual face washing AT LEAST once during the week. This symbolic act releases the remaining nimrods from engaging in such serious activity. PW was given the honor this past camp, and conducted himself with proper decorum.

With the salt of his brow, and the saliva of the dogge's maws, the blessings of the Spider Lake Naiad are secured for the week.

Posted by Anonymous at 2:37 PM No comments: