I took Brant hunting for ducks this morning.  He communicated a simple truth last night as I left him for a deer stand, in the rain. With his eyes he said... "when its raining, we hunt ducks."  I believe he crystallized another "versatile hunter" maxim in that moment. 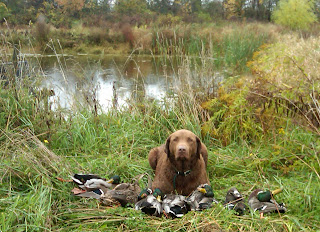 This morning, the hunt was a classic October duck hunt... a few birds flying around right at first light in the light rain, and then tapering off by 8:30 am. The hunters shot reasonably well, the dog retrieved reasonably well.  But, for Brant, it was just a marvelous day... a hunting day.  He was simply happy, blissed out, digging the "is-ness" of the dawn, the ducks, of the sublimity of the damnable pleasure (Tantillo 2002) of hunting.  I sat watching him, studying him, his demeanor, from our shared spot in the tall marsh grass-- we were both sitting on the ground together, both watching the skies hopefully, awaiting the moment when we could do the next thing, the thing that we love slightly more (only slightly) than what we were already doing.  He felt my gaze and turned his head to look at me.  Thump-thump-thump went his tail as his eyes brightened, looking deeply into my own, and then he looked away, looked out over the waters. His could have been the eyes of any of my companions, as the ducks are setting their wings, communicating sentiments like "isn't this amazing?" I sat there processing the second lesson from Brant in less than twenty-four hours.   Find ways to wag more and bark less, he seemed to say.  Words to live by.
Posted by KGT (aka Cagey) at 3:47 PM 3 comments:

They were calling for a blue bird day.  Nice turkey conditions. 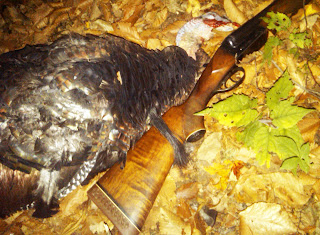 Durkin: Eternal debate over what's OK, what isn't
Posted by KGT (aka Cagey) at 2:08 PM 1 comment: 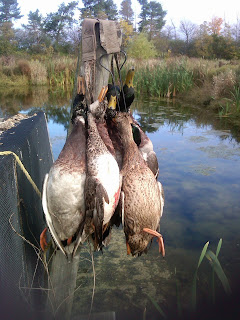 Given that scouting and field reports indicated low numbers of ducks on Cayuga Lake and higher numbers on small ponds, creeks, etc, I decided for the first time since living in Canoga-land to open the duck season somewhere other than the Double Black blind.  I am glad I did (except that Rich was short by half the required team mental power in the "sheer-force-of-will-to-conjure-ducks-from-nowhere" department... but that is his story to tell).

The idea was to conduct a methodical, calm, safe, fun hunt for Danielle's (Eric's daughter) first duck opener as a licensed NYS hunter. No typical opening day "whipped-up-into-a-frenzy" blood-lust, no assault-style Mexican army barrages against hapless Wonder-bread eating young of the year mallards from up the lake, where one not quite green-headed fowl is claimed by 5 shooters who have all emptied their guns.  No, we'll have that fun later (and that IS fun sometimes).  This hunt was for Danielle.

We (Eric and I) debated about whether we should try the ponds at Kuneytown, at Log City, the new ones in my back fields, or at the Morehouse Bait Ponds (see Jim's map here  (cat icon)).  We decided, once again, for the "sensible route"... go to the place most likely to produce.  Pre-hunt scouting confirmed the choice. 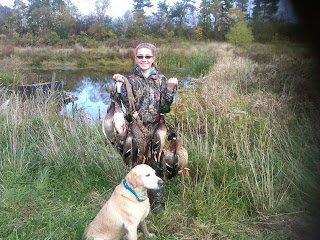 In the end, Danielle shot three ducks on her own, and "participated"  in others.  I was hoping to be a videographer, but lighting and vegetation made it difficult.  So, I called ducks, encouraged, and took shots that Danielle and Dad (Eric)  passed on (or rarely, missed).  It was novel, challenging, and fun.  I ended up with some memorable solo successes on multiple species, nice and unexpected rewards for patience and deference.  We ended the day day with 11 birds-- 1 gadwall, 1 green wing teal, 1 black duck, and 8 mallards. Danielle's smile at the end of the hunt was priceless. 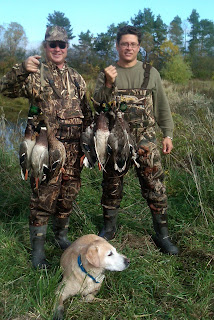 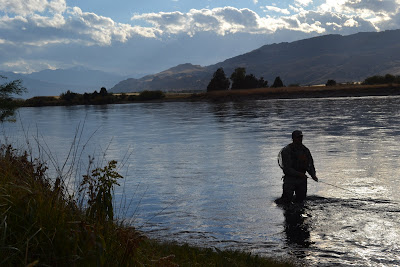 Hello all - The move and adjustment to Montana has been treating me well. The learning curve is steep. Simply choosing a direction, any direction, to start exploring is daunting. Missoula has been welcoming and the streams cooperative ever since the record-breaking snowfall finally retreated. Between fishing trips and visitors to town, I've been weaseling my way into a few different groups out here, among them the HHA. In addition to a simply badass name, the group seems to be a very active, very forward-thinking group of conservationists bent on spreading the message and giving voice to outdoorsmen concerned with protecting Montana's vast, but surprisingly threatened, natural resources. One of their more recent projects is a blog, found here. Their goal is to draw traffic with hunting/fishing stories, but also as a platform for steering hunters/anglers toward current conservation issues. As for political influence, their legal structure allows for "accountability" of office-holders and agencies, but not outright politicking or advocacy for certain candidates, as you'll see. I share it here for your feedback. It's a new endeavor, with motivations right up "our" alley, and a work-in-progress; your thoughts would be appreciated! Hope you all are well and wish you luck in the woods and in the blinds!
Posted by Alex Metcalf at 10:51 AM 1 comment: