Nothing like waiting until the last minute. My brother, Chris, and I hunted Monday morning. Spring turkey season ended today. We had the whole month of May to chase turkeys, but due to weather, wary birds, and poor calling technique just hadn't been able to get it done. Monday was going to be it for both of us. We hunted a brand new location that we'd just gotten access to, but one in which we've see quite a few birds. Unfortunately the evening before we had a significant storm come through right before dark - 75 mph straight line winds and heavy rain. Turns out the winds knocked down what seemed like half of the mature trees in the woodlot we sat on the edge of and where we thought birds were roosting (didn't realize this until the sun came up).

Anyway, nothing gobbled from the roost anywhere around us that morning. About 6:15, Chris spots a Tom come into the field we were watching from the NE (to our right). Seemed responsive to our calling, but couldn't get him to come any closer than 100yds. Eventually a couple hens showed up and pulled him even further away. We sat there and watched the show for a couple hours. Figured we were screwed. Hens eventually decided to head to the NE (again back to our right), and toward a location that we might be able to ambush the Tom if he continued to follow, which he was. So we slowly backed into the woods from our location and tried to sneak through the woodlot. This is when we discovered all the trees laying on their sides. Trying to get into position was more of challenging then we thought. Chris and I separated as we made our way around the downed trees and to where we thought the birds would come through. By the time I got into position, the hens had already made their way through the field we were watching and into an adjacent field. Fortunately, we hadn't disturbed them. But still no Tom. Eventually I moved enough to where I could see Chris and he signaled that the Tom was still in the main field. We slowly continued to sneak into position.

The Tom had hung up in the main field, but was close. Another 10-15 yds and he should be in range. Unfortunately he decided not to follow the hens, but headed back in the direction he just came and away from us. That's when Chris noticed another bird. When I finally saw the other bird, it came running up to the Tom. They were both now 100+yds to our SW. Again we figured we screwed this all up. Chris and I stood behind the top of a downed tree and watched these 2 birds mess around in the middle of the field. Chris thought the other bird was a hen, but by it's behavior I thought it might be a Jake. Fortunately I had my rangefinder with me and could just make out the stub of a beard on the 2nd beard. Definitely a Jake. About that time I notice a hen had snuck out into the field to the north (almost behind us, to our right). Chris and I were exposed and assumed busted, but the hen just stood there. After about 10 minutes of just standing there like statues the hen began to feed. Chris then says, "hey they're headed this way and running!" The Tom and Jake must have seen the hen and were beelining it in our direction. Chris squatted behind the downed tree top and I set up off to his right. He says what's our plan - on 3 and you take the bird on the right? Sure! The two birds were on us in no time, moving left to right. They were at about 50-60 yds. The big Tom was in the lead. I had to wait until the Jake cleared the edge of the downed tree top, so Chris had a shot too. I now had a clear shot but the Jake wasn't in position yet. Unfortunately the Tom saw something he didn't like and I could see was starting to get nervous. The Jake needed to come forward another 10 feet, but about that time the Tom did a pirouette and was buggin out. No time for 1-2-3. He took my #5 Winchester Supreme turkey load right in the noggin and dropped in his tracks. This left Chris a bit out of position and he had to raise up on his knees to get a clear shot of the Jake. His shot was bit rushed, but found its mark. He knocked the bird down, but he needed a 2nd shot to be certain.

A fricken double on the 2nd to last day of the season. First time we took birds when we were together and we both took a bird. Very memorable!!! 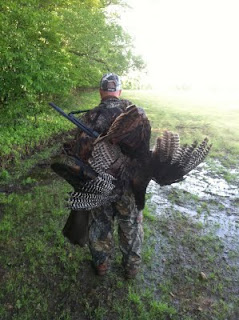 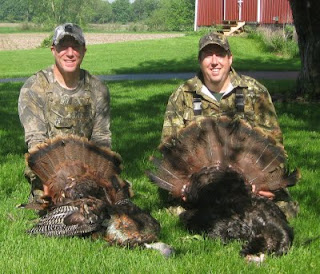 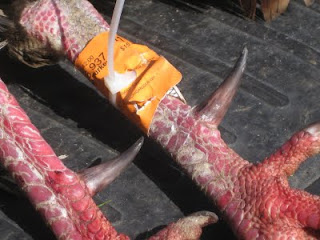 Chris ended up taking a 15 lb Jake. Mine was a 24 lb Tom with a 10 inch beard and 1 and a half inch daggers for spurs!! Could have easily gone the other way, I just happened to be in the position to take the first bird and it was the big Tom.

Great way to end our spring turkey season!!
Posted by Safari Jim at 8:58 AM 4 comments:

Classic piece of the Nuge on public television discussing the second amendment. That's three great tastes that taste great together. Oh, there's some NSFW content (does that make it four great tastes?).
Posted by Anonymous at 8:23 AM 1 comment:

Starts and Ends in the Kitchen

Two gobblers walked through the narrow opening between the fields, but at that distance I couldn't tell whether they were toms or jakes. I had done some calling at dawn from the front porch, but hadn't gotten a response -- maybe this was a delayed response to those yelps, two hours later. I drank the last of my coffee, put the kids' oatmeal bowls in the sink, and grabbed a camo shirt from the laundry. And down the road I went.

Keeping low, I scurried along the driveway, headed for a likely spot in the woods in the turkeys line of travel. Sat down against a too-small tree, pulled up the face mask, and gave a few clucks on the slate.

Within a minute the birds materialized over the knoll just inside the woods, coming my way. Purr, cluck. They continued forward, looking for me. About 35 yards out, craning necks, the gobblers surveyed my vicinity. A cluck from my mouth call put any doubts to rest, and they adjusted their path to put a little more distance between us as they circled around me, downhill, out of view in the woods. They weren't buying it.

A couple of clucks on the slate elicited a gobble downhill to my right. Minutes later, clucks were answered by a gobble, this time farther away and behind me. 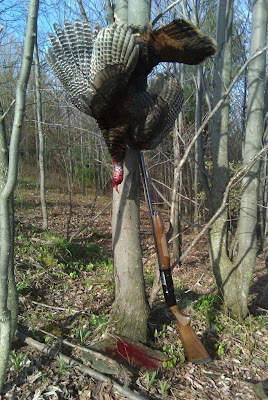 I turned around, and gave several purrs and clucks, flapped a wing in the air and scratched it in the dirt. Cluck, purr, cluck, and I could hear the pitter patter of turkey feet running my way, downhill from me to my left, coming up the hill and getting nearer. When they came into view they were almost behind me. Kneeling, I twisted around 120 degrees to my left. The first bird stopped in an opening between trees at 20 yeards and I popped him in the head. The tom immediately took to the air as the jake flopped on the ground.

The jake was pretty small, with nubbins for spurs. That night we dined on tender turkey veal dusted with Emeril's, lightly marinated in Newman's family Italian, and grilled to a hint of pink, with a Finger Lakes reisling, wild rice & shittakes, and steamed asparagus. A couple nights later it was wild turkey/wild rice/wild mushroom enchiladas. Our first spring NY turkey, scouted from the kitchen. Natchur'ly. 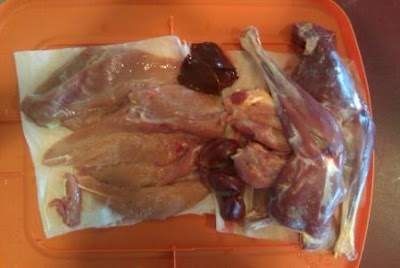 Parts is parts, parceled, and PW focused on focus of cell phone camera. 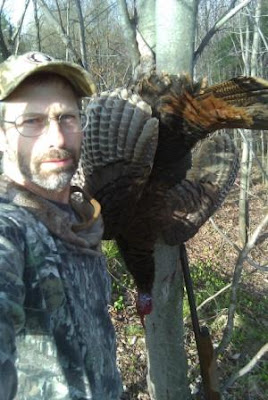 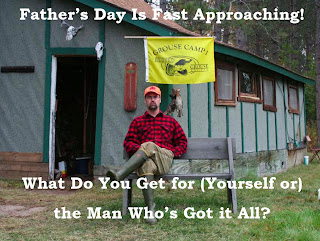 courtesy of Regional Biologist Andrew Path Walker Weik and YOUR Ruffed Grouse Society.
Posted by Jim Tantillo at 6:47 AM No comments:

courtesy of a state Hunter Ed coordinator (ain't sayin' which one).

courtesy of Mr Joshua "Voice of the USFWS" Winchell.

Is it sporting?  discuss.
Posted by Jim Tantillo at 5:10 AM No comments: