Ignorance is no excuse

Over the years, there have been some interesting interpretations of game laws, most pertaining to waterfowl, that have presented themselves in field or blind (or at Beer Camp, or Kuneytown). I have just perused for fun and kicks the Federal Migratory Bird Hunting regs...which may not be as strict, but are at least as strict, as state laws. This may be useful as openers are fast approaching.

Ok, you know who you are on that one.

Migratory birds on which open seasons are prescribed in this part may be taken by any method except those prohibited in this section. No persons shall take migratory game birds:
(h) By means or aid of any motordriven land, water, or air conveyance, or any sailboat used for the purpose of or resulting in the concentrating, driving, rallying, or stirring up of any migratory bird;

In other words, no booting the geese off of neighboring fields by driving a 4 wheeler in hopes that they will fly up and come to your perfect spread where your buddies are honking and flagging their hearts out to freaked out birds. Its a no-no. Myself and others- guilty but reformed.

Ok, so for the guys who keep telling me its ok to shoot a limit in the morning, "reduce them to possession" at lunch (in other words, breasts in freezer bags sans heads & feathers) and then go shoot more birds "because my daily bag limit has been re-set," I say, knock off the bullshit. Once again, you know who you are.

Note that it does not say "...unless the birds are in your freezer."

Back to your regularly scheduled programming. Over and out. 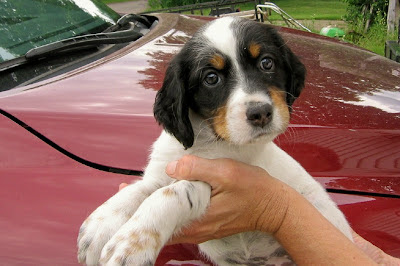 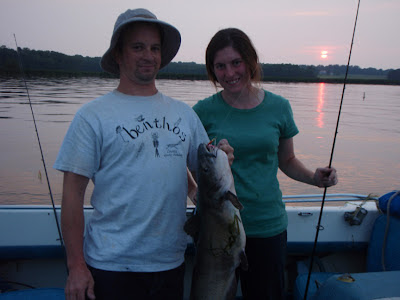 Click on the picture for the full story. (yep, thats the Canoga Creek Farm & Conservancy over the successful angler's left shoulder, under the setting sun)
Posted by KGT (aka Cagey) at 2:22 PM 2 comments:

The house is quickly losing all semblance of normalcy. 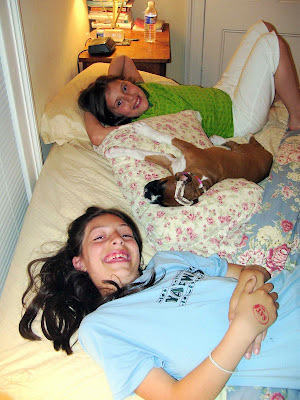 That used to be my pillow. 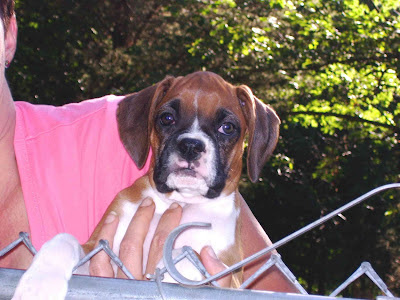 with factory-standard ears
Posted by Jim T at 7:05 AM 3 comments: 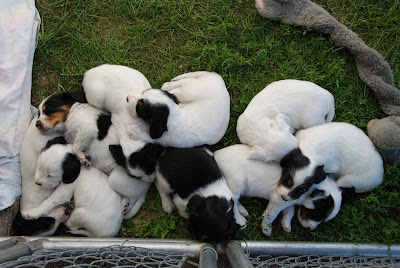 the best bird dogge book out there. period. 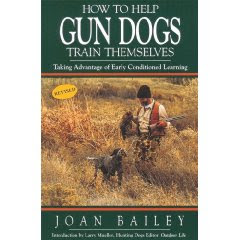 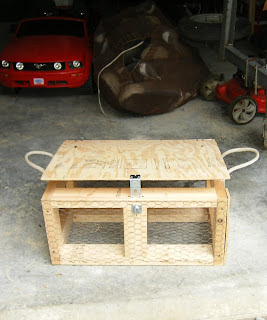 Bird crate with purpose-built Mustang carrying car in background
It's a real blessing to be transitioning from a period of bereavement over Abbey's loss to anticipation over Tiger Lilly's arrival. This morning's blog photos of pups prompted me to scrounge around the garage for materials to build a bird crate. Two hours later and the pigeon/quail crate was completed from the flotsam of past building projects. A bit over-built with 2x4s and 0.5" plywood lid, but not too heavy to lug from the truck to the midst of a training field (tested by completing one lap around the house). I will add a quail entrance from Lion Country Supply (20 min away) to make it a come-back cage, increasing the material cost from $0 to $16. Happy to build another for others with pups on the way...
Posted by Dr. Dirt at 4:02 PM No comments: 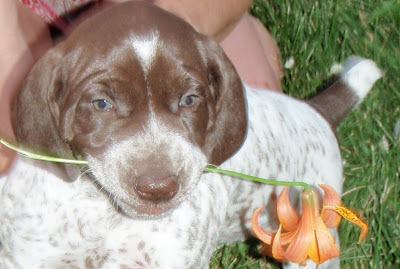 Which of these is the lucky one? 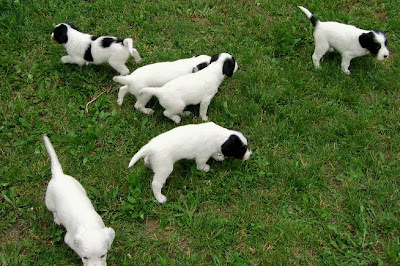 Here are six of the nine from the litter that whelped on June 13. Two females, seven males. Somebody help me pick the one I want!!
Posted by Jim T at 11:22 AM 1 comment:

Hadn't had a bloodthirsty day in a while, so pulled out the old varmint gun and went snipin' yesterday. 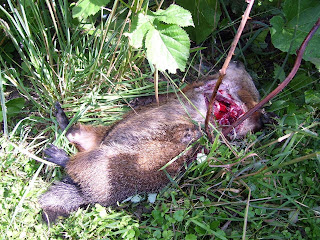 A Capstickian death in the tall grass . . .
The first photo is of a not-too-old male chuck who had moved into an old den under one of our sheds. I've been watching him for several weeks and had concluded he was likely a male when no younger chucks materialized. I did a sneak on him at first from around the house: he detected me and dove back into the ground for cover.

Twenty minutes later he wasn't as lucky. This time I did the full-blown military crawl out onto the turf and assassinated him at 62 yards. I then decided to put him on the woodpile as fox bait.

I eased into fox sniping position at approximately 7:45 pm. Two days earlier a guest had seen a fox in broad daylight between our two barns. I set up in our pole barn, hunkered down between our tiller, snow blower, and lawn tractor. nothing shoots like a Deere . . . . 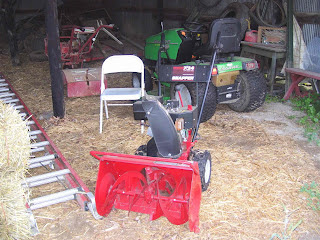 the fox blind
At approximately 8:10 a woodchuck wandered out from the bushes that surround our big barn. I sat and watched him for five or so minutes, resolving to put him on the list for August.

At that point a fox sticks its head out from the exact runway the woodchuck had used, and it stood there craning its neck to survey the yard with the woodchuck just yards away.

Of course, I'm pointed in the wrong direction, having baited my brush pile out in the middle of the sheep pasture. Plus my small engine blind doesn't really do a good job of covering me up. Feeling exposed, I sat there watching the two critters for a minute, hoping the fox would move out and allow me to reposition to line up a shot. 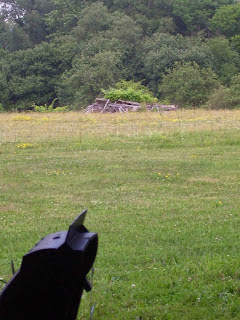 A fox bait pile in the act of being ignored by foxes . . .
The woodchuck then lunged at the fox! startling it perhaps, but at any rate the fox ran out into the grass and behind a spruce on the lawn. I hurriedly repositioned, and then it came back toward the bushes by the barn (which are loaded with black raspberries at this time). I didn't have much time to line up, and he was just about to go back into the bushes when I touched off a shot--MISSED. Damn. I went over and looked at where he had been, and nothing. nada. zilch.

I went back to my seat in the pole barn, and decided I needed a better blind than a Troy-Bilt. Hastily I pulled four bales of straw down and placed them between me and the bushes the fox disappeared into. Back in action! 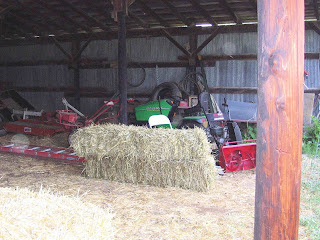 Fox-eye view of the blind:
note skill in straw camo placement
It didn't take long. About twenty minutes later this little boy appeared from around the back of the barn, nonchalantly walking over to the raspberries. He presented a perfect broadside shot standing still at forty-five yards, and I quickly dispatched him. 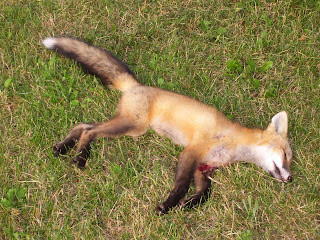 So peaceful in deathly repose . . .
I let him lie, thinking there might be yet another curious fox to come. Sure enough, around 9:30 another fox came slinking down along the pasture fence. This time the varmint was moving way too fast to even think about shooting, and he disappeared off into the darkness. I decided to call it a night. 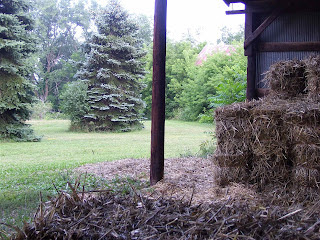 View from the blind: where foxes come to die
Posted by Jim T at 5:27 PM 2 comments:

could this puppy be the next Kate? only time will tell. this one's a male, though. we'll see. 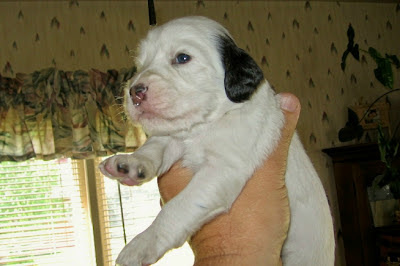 Why foxes are bad news in T'burg

This just in the local paper this morning:

TRUMANSBURG — The Tompkins County Health Department issued stern warnings about rabies after a child was attacked by a fox Monday morning in Trumansburg.

“Rabies is here,” said Frank Chase, a public health sanitarian for the health department. There have been 11 confirmed cases of rabid raccoons and one confirmed case of a rabid bat in Tompkins County in 2008, he added.

“The fox caught rabies by being bitten by a raccoon,” he said, adding that this number of raccoon rabies cases is an epidemic.

In a statement released Tuesday the health department said rabies is a viral disease that can infect any mammal, including humans. It is usually transmitted by the rabid animal's saliva, often through a bite or a scratch.

Chase said the fox bit the child on the ankle, and when the child was holding the fox around the neck with her hands, it bit her wrists. A Trumansburg police officer separated the child and fox and then shot the fox, he added.

“The policeman had to knock it off the child before he could shoot it,” Chase said. The fox tested positive for rabies, the health department said.

“The child is receiving rabies post-exposure shots, as are three other people who also had contact with the fox,” health department officials said.

Chase stressed that different strains of rabies are epidemic in different animals.

“Rabid raccoons usually attack dogs, and are usually killed by the dog, or the dog's owner,” he said. “Rabid foxes usually go after people.”

There are cases of raccoon and bat rabies in New York state, but no cases of fox rabies except perhaps the state's northeast corner, near the Quebec border, Chase said.

“Otherwise, we'd be having a lot more of these fox attack incidents,” he said. “We're having rabid raccoon incidents all the time, but the raccoons are not attacking people.”