The 2011 waterfowl season has been unseasonably mild and a bit slower than years past in the Canoga Creek environs.  The late season opener saw very mild temps and light winds, not optimal for open water.  We hunted the bait ponds and shot four mallards.  Nick handled the retrieving duties and made some miraculous finds in heavy cover.

The second day of season seemed to promise cooler temps and some weather, so a field hunt was organized on the Hoster field. Rich was in on this one, a tough, muddy, hardcore layout hunt in which we knocked down 9 geese and 1 duck.  Three of the geese we knocked down made the end of the field and crash-landed in the gully behind my barn.  They were unfortunately not found (no dog).

Day three found us accompanied by Dan DeLaywer of NY Ducks Unlimited ensconced in the comforts of Double Black blind on Cayuga Lake.  Due to very late carousing the night before with Dan, we all shot very poorly for the first flights, but finally managed to scratch down a half dozen mallards between the group.  Brant did the the retrieving and performed well. It was great reconvening the old crowd- Ernie, O'Connor, Riegel, Dan, Danielle, and myself.

Day four found us back in the bait ponds, taking advantage of a hard freeze that occurred overnight.  We had planned ahead for frozen water and had set up a blind near a spring fed pond that almost never freezes, leaving a duck magnet when all other inland water is locked up tight.  We shot 5 ducks- 2 gadwall and 3 mallards. Nick was on duty for the retrieves.

Day five, it was back in the ponds, as Rich had reported having been frozen out still at Double Black.  Conditions were milder, but the ducks were still few and far between.  We again shot five ducks, the bag consisting this time of 2 black ducks and three mallards.  Brant did some nice retrieving, but there was nothing spectacular in that department.

Day six, the last hunt of 2011, found us once again in warm temps and very little wind.  Though we were ready for a change of season, the ponds were the choice.  the early flight was slow, but the action turned on after 1000 and we, once again, scratched down 5 ducks- 1 gadwall and 4 mallards.  Brant made some great finds in heavy cover, including two blind retrieves, demonstrating a kind of coming-of-age wherein he is developing instincts and beginning to use his nose where needed.  It was a great way to end the year.

Happy New Year to all grousers.  Here's to a happy and healthy 2012. 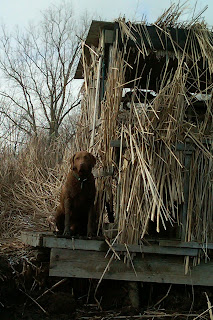 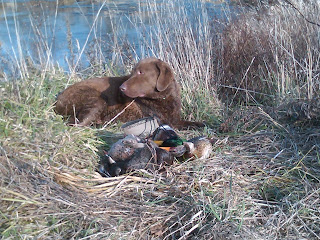 Quit work early to return to the creek for another round of jump shooting. No kids this time (still visiting grandparents in Arkansas). Much colder. But the ducks were equally accommodating. 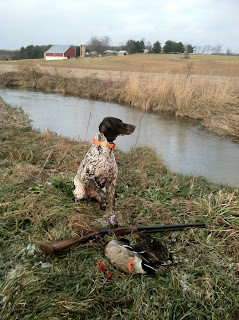 Looking out my dining room window you can almost miss the half-mile stretch of creek that runs through my neighbors’ fields. A line through grass at the bottom of the broad valley, it’s usually more void than body. Forced out of its meander long ago, the creek cuts deeply into the alluvial soils that bound it. Leeches have made their home in its warm, muddy stretches.

Even with all of its ailments and insignificance, there’s not a member of this blog who wouldn’t see this little creek's potential. I covet it, although I could never afford to buy the farm through which it courses. Looking upon it I imagine a healthy riparian system with pothole ponds, trees, brush, flowers and wildlife. Like much of the land around my house it is a blank canvas.

Occasionally, the creek provides hints of what it would offer when healed.

I left work around 2:00 yesterday, heading home to watch the kids while Kelly shopped for their Christmas presents. It has been a gloomy week at work, federal budget cuts finally coming to roost upon our lab, and I had hoped at some point for a cathartic grouse hunt over Lilly. Now I had my beloved kids to factor in. Grousing seemed out.

We’ve had a lot of rain this year. More than 60 inches in an area that normally gets around 40. Recent rains had flooded wetlands along the drive home. By the time I rounded the last bend I had hatched a plan for waterfowl, unlikely as it seemed.

I stopped off at Bobby’s, my other neighbor, with the offer to swap my kids for a hunt with him. He has three daughters who bracket my kids’ ages, so the proposition wasn’t as unreasonable as it might sound. Bobby had seen ducks along the creek earlier in the week, and was nearly swayed by the offer. But, he had work to do making his participation out of the question. I couldn’t muster the chutzpa to ask if I could just drop off my kids without some form of reciprocation.

I’ll take them with me I decided.

So it was that we three marched with Lilly across my little farm, past my equipment shed, and down the lane to Half Moon Creek. I let Lilly run much of the way, stretching out her long legs after a day cooped up in the house. She ranged widely. Before I knew it she had reached the creek by the bridge and was making for the water. I called her back. Here! Here! Here! She returned reluctantly. So much for a sneak.

Even so, I was committed to the plan to stalk the remaining length of the creek. Kids trailing by a few yards. Dog on heel. Occasionally poking over the bank to search its contents.

Nearing the creek we cut off the laneway, bypassing the stretch that Lilly had travelled. I was surprised by the noise of stiff feathers launching birds from near the bridge. Two mallards rose, not 30 yards from my position and only 10 yards from the spot Lilly had momentarily visited.

I wheeled, noting the kids – great kids – were exactly where I had told them to be, several yards behind me.

I picked the green head and shot.

The bird flinched, but kept flying. Off, down the valley with its mate. Lilly trailing at full speed.

Wait. While the hen headed skyward the drake remained only 10 yards above the flood plane.

Then the bird wheeled down to the creek. Lilly hot behind.

We waited. After a minute I told the kids to wait in the open at the bridge so that Lilly would see them and return to them with duck if she found it. I headed down the other bank to help dog locate bird.

50 yards downstream I saw Lilly racing back to the kids. No bird.

Here! Here! Here! She snapped to me. Launched herself, 10 feet across the creek. Bank to bank. A spectacle of athleticism.

We hunted the final yards downstream. Another bridge crossed the creek. Lilly ran across it and under it. I could see her stop momentarily, scooping the bird up. I didn’t even need to call her. She came. Fleet, fluid motion. Bird in maw.

The drake was very much alive when she dropped it off. A crisp retrieve.

We returned to the kids, waiting for us at the bridge where I had left them. Cheers went up when I hoisted the bird. Mallard! Mallard! Then excited prattle about Christmas duck and Christmas presents and Christmas music and duck feathers on our Christmas tree.

We walked the long lane home. Half Moon Creek babbling behind us. Nearly bank full. 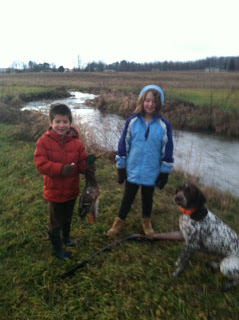 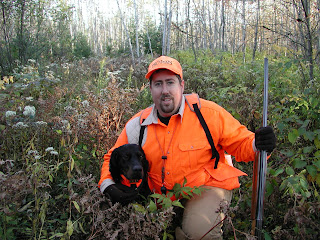 Rough day today. Thor had a seizure, out of the blue, this morning and never recovered. He passed away as I rushed him to the vet.  He may not have been the best hunting dog I've ever owned, but he sure was the nicest.  Don't think I'll ever find another like him.  We've all lost our hunting buddies before, but it never gets easy.  Give your hunting buddies a good squeeze for me and remember the Thormeister.

Josh is on to something

Recently there was a request to start a "gun thread"... so here goes.  I want one of these (thanks Josh) for Christmas: