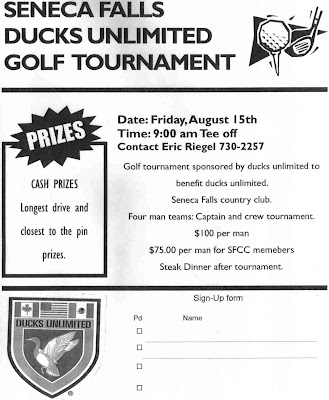 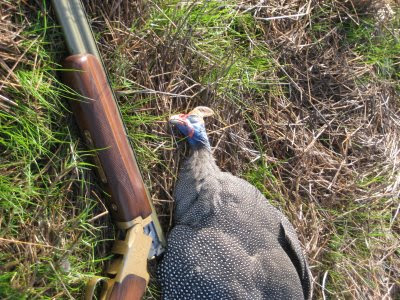 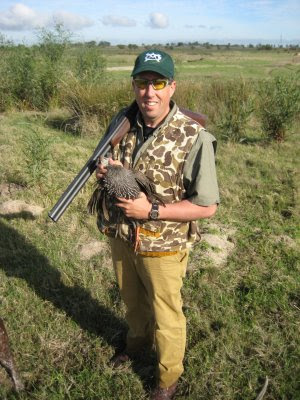 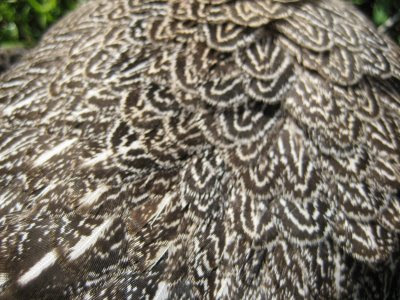 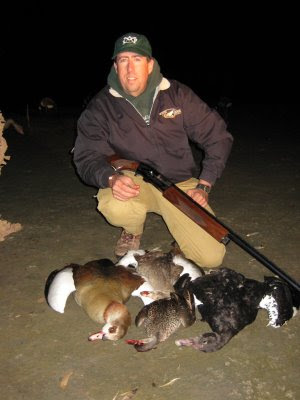 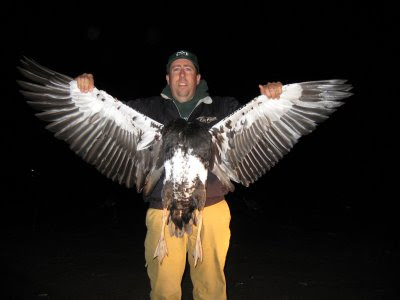 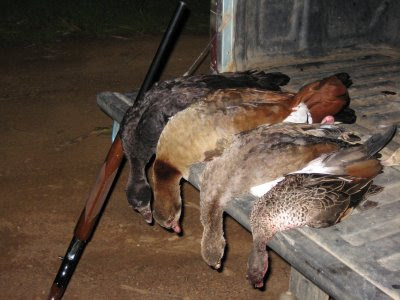 Been meaning to post a few pics from my South African bird hunt. Don't have any great stories, nor the story telling abilities of CB. Al Stewart, Michigan's Upland Game Bird Biologist, and I hunted for 2 days in the Durbanville area of the Western Cape. All told we harvested 7 different species: Helmeted Guineafowl, Cape Francolin, Rock Dove, Cape Turtle-Dove, Egyptian Geese, Spur-wing Geese, and Hottentot Teal.

Will try and post some more information later this evening.

Gotland, Sweden: Towards Fishing for Aesthetics

Back in April I presented a paper at a conference in Stockholm and then took a few days to visit Gotland, a Swedish island out in the Baltic Sea (4 hours by ship). It was a beautiful place, and the sea-run brown trout were in the shoals and shallows. I tied into one, probably a 5 pounder or so, but lost it (most likely due to my inferior knot-tying) at the net. There were many rises, but as you can see from the footage and the stills, it was so calm that I fear my presentation spooked many more fish than enticed. Need some practice with the 8-wt. But damn, was it beautiful. 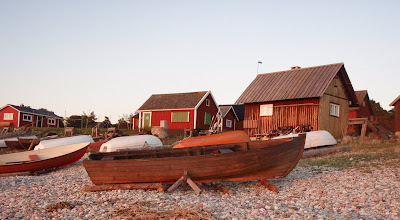 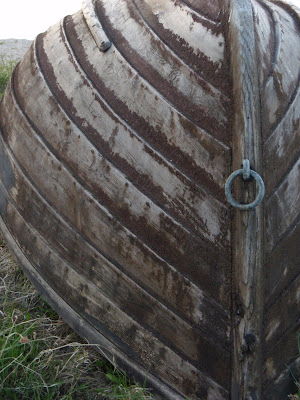 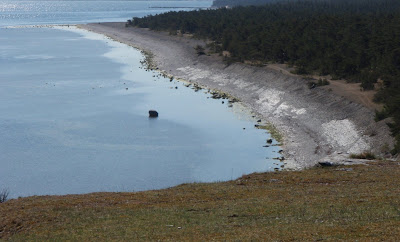 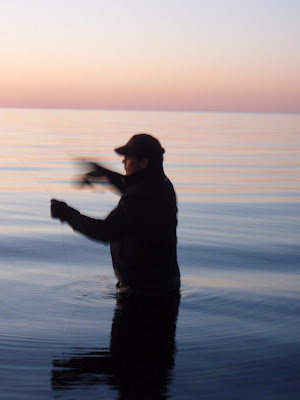 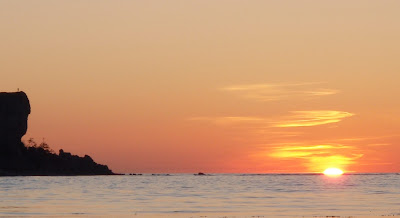 At Vicar's suggestion. Make sure your sound is turned up. 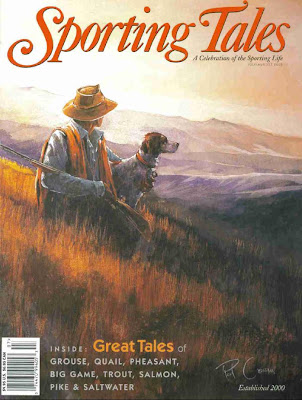 I have had a couple of requests to post some things that I promised but never delivered on, for example, a snow goose hunt photo collection, a squirrel derby photo collection, and a link to a story I wrote for Sporting Tales a few years ago.

So, I will start with the easy one. Click on the Sporting Tales cover. More soon.
Posted by KGT (aka Cagey) at 1:39 PM 4 comments:

Get the lead out

Here's a piece of blog material from Path Walker, posted on his behalf.

PW's thoughts? "The thing that stands out to me on the lead bullet subject is shot placement -- i.e. head/neck is the way to go, and definitely avoid shoulder shots. "

I spent all day yesterday at a conference convened in Bloomington, Minnesota, but attended by agencies from 7 different states, to discuss the current hot-topic concern of lead fragments being found in venison. States such as North and South Dakota, Minnesota, Wisconsin, Michigan, Iowa and Missouri all collaborated to share information and discuss the potential health hazards to the venison consuming public.

As you can imagine, during an all-day conference a lot of good information came out. Represented were officials from all the different state wildlife departments, as well as from agriculture and public health departments. Also rounding out the list of attendees were various special interest groups promoting hunting and professional meat packers. Suffice it to say the group was quite broad and the topic was truly examined from very diverse perspectives.

The perceived problem: Using lead bullets will often fragment upon impact and this metallic lead dispersal can be retained in the deer’s carcass and eventually make it to the hunter’s table where it can be ingested by the hunter’s family. To read more on events creating this controversial topic and the tons of hunter-donated venison subsequently pulled from food shelves back in March, click here.

Gotta take your excitement wherever it comes: redux 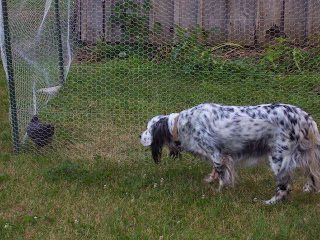 Here's Katie pointing the the last birds she'll likely ever point. Gotta take your excitement wherever it comes. Film at 11. 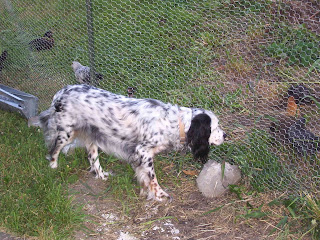 Katie's actually doing pretty well on her medicines--she is taking something called Piroxicam, which apparently has anti-tumor properties that may include slowing blood flow to the bone tumor. In a month's time she's done really well, far better than our boxer who died of bone cancer, and so now we're hoping / expecting Kate to make it into July at least.

I realized I had never taken any film footage of her. That was probably a mistake. Next dog we'll get on film.

Interest In My Tale Has Bottomed Out 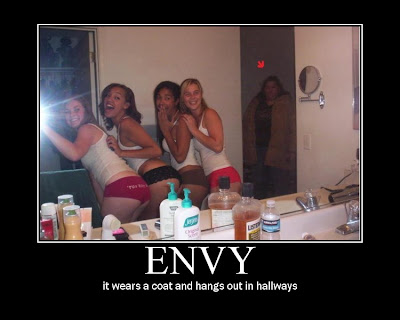 I was flushed with excitement to share my golfing anecdote. I decided to take a chance, roll the creative dice, and not worry whether I might crap out.

Maybe the writing was a bit loose. Maybe my creativity, scant as it is, has just pooped out.

I’m not privy to the reasons for the group’s indifference. But the deafening silence has wiped the smile from my face. I am become the butt of your jokes.

Well, at least I tried. You won’t hear me grunting about it again.


In an unrelated matter, some of you may be members of the Ruffed Grouse Society. Bob West’s article in its Summer, 2008 magazine has a lot of local flavor, featuring a pup that is a granddaughter of Buster, a dog that has swum in the Tantillo pond and made a terrific wc retrieve for Keith. Read all about it here.
Posted by Michael M. at 9:14 AM 3 comments:

No better place to fish...beer camp! Nice pond bass, caught on a floating Rapala at dusk. Thanks Ernie! 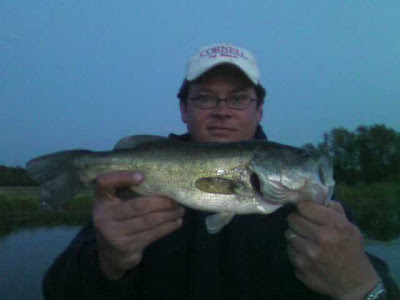 What's Behind The Story 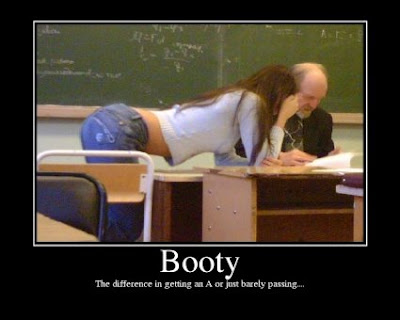 I played 18 holes the other day at the local muni. Arriving as a single, I was paired with a man and his daughter. He was 74, I learned, while she seemed maybe light to mid 30's. Quite attractive she was, too, and a player on our regional women's hockey team that won the Nationals in California in 199-something. But that is not the story.

They left after 9, so I played on as a two-ball with a fellow who had joined us three on the 6th tee. As play had slowed down after the temperature had spiked up, he begged off at the 13th tee, and I found myself suddenly alone. On an empty course, this can be fun; but when the track is jammed, playing alone destroys rhythm. For some time I’d been absently tracking two ladies, visibly more than a little older than I, laboring onward slowly two holes ahead. Well, soon they were hitting their "second" shots on #14 just beyond where my drive landed, center cut and 14 paces inside the 150 yard marker on this 390 yard hole. Incredibly, that is not the story, either.

I hailed the ladies and asked them politely if I could play in with them. Apparently approving of the young stud hottie, they said yes. And after a time, we putted out on the 18th and said farewell. Here is the story: I noticed one lady had a distracting bit of extraneous clothing waving about. I tried not to stare; and I certainly wasn't about to say anything. She was wearing white golf pants, which made a positive ID more difficult. But the disturbing image that lingers still is the TP flapping about 8" above, beyond and behind her elastic waist band.
Posted by Michael M. at 8:44 AM 2 comments:

Been a while since we've had a decent setter blog posting, and inspired by Josh's recent post . . . .

Here's an excerpt from "Field Sports," a poem by William Somerville, an English poet who specialized in poems of the chase:

When autumn smiles, all beauteous in decay,
And paints each chequered grove with various hues,
My setter ranges in the new shorn fields,
His nose in air erect; from ridge to ridge,
Panting, he bounds, his quartered ground divides
In equal intervals, nor careless leaves
One inch untried. At length the tainted gale
His nostrils wide inhale, quick joy elates
His beating heart, which, awed by discipline
Severe, he dares not own, but cautious creeps
Low-cowering, step by step; at last attains
His proper distance, there he stops at once,
And points with his instructive nose upon
The trembling prey. On wings of wind and upborne
The floating net unfolded flies; then drops,
And the poor fluttering captives rise in vain.

Don't you just love that? ahhhh. 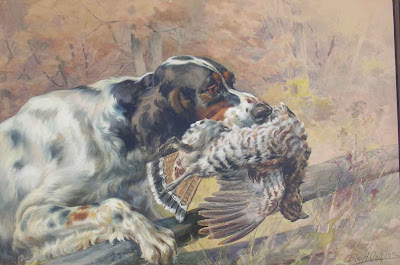 My setter ranges in the new shorn fields
Posted by Jim T at 5:46 PM 1 comment: 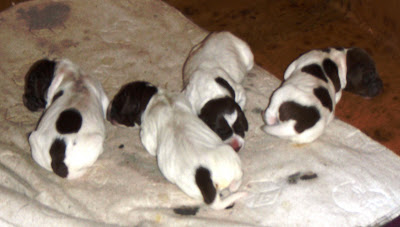 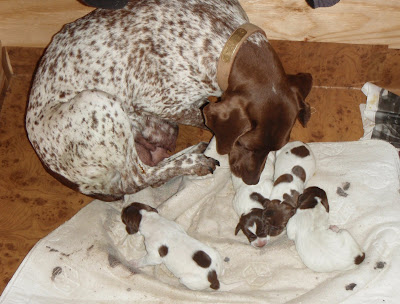 2 males, 2 females-very cute and plump. Artemis is doing a great job, especially given this is her maiden attempt. Vet check went great and the pups are very healthy.

1 deposit on a female, 1 request on a (uncommitted)