Ballet Boy in the Bull's eye

From the Ithaca Journal

When Historic Ithaca announced in May that it wanted to sell the Clinton House, it said the purpose was to get out of the “landlord business.”

“Obviously the Clinton House sale is the most dramatic component of the organization's commitment to addressing the structural operating deficit of the State Theatre,” Tantillo said in an April 21 e-mail to Nels Bohn, director of community development for the Ithaca Urban Renewal Agency.


Well, grousers, this looks like a brother in need, a fellow comrade taking fire. Who will join with me in acquiring a bottle of scotch and pursuing the raising of ballet boy's spirits?
Posted by KGT (aka Cagey) at 12:50 AM 3 comments:

Took a side trip to my homelands on the shores of Gitche Gumee after the Ecological Society of America meetings in Milwaukee earlier this month. Brought along my little 3 wt fly fishing set up for grins and giggles. What a blast. Twelve little rainbows in two hours on the Split Rock River, where it empties into Superior. Capped the perfect day with a Bald Eagle landing in a tree near me, which I was able to film. Figured I had better get these posted before Rich posts his Alberta monsters and makes my little minnows totally irrelevant. 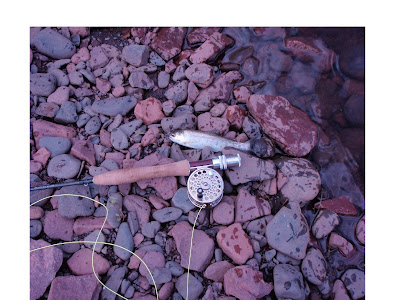 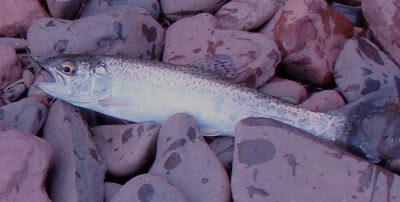 "Those who have never seen Superior get an inadequate idea by hearing it spoken of as a lake. Superior is a sea. It breeds storms and rain and fog like a sea. It is cold, masterful, and dreaded." 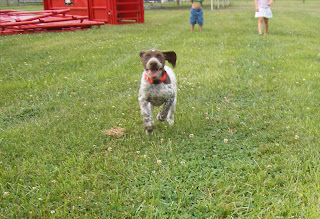 Lilly at Penn State's Ag Progress Days
And she's off and running! Lilly is the proverbial handful and a heck of a great pup. I am guessing that she has more energy than all dogs that I've owned, combined. To channel that energy I've spent more time in the woods and field with her than I had with Cody all of last season. She is a bold pup, prone to coprophagy and an incessant nipper. We have crossed paths with one grouse and a flock of turkeys, as well as snakes, switch grass, pine cones, sticks and chipmunks. With the grouse (this morning), we investigated the barberry patch from whence it flushed and she showed general curiousity. More remarkable was her drive to push through the barberries. She is definitely my kind of dog: driven and bold.
We're working out the Cody dynamic. Lilly gets one solo walk a day and up to three walks with Cody. Cody, poor, loveable Cody, is Lilly's chew toy. If Lilly is alpha, Cody is omega or zeta or whatever comes last. Our combo walks begin with Lilly attacking Cody, Cody moving out of Lilly's 0-20 yard range. After awhile Cody can return and the two dogs largely ignore each other if we are in an area with plenty of things to investigate. If not, then Lilly the ambush predator takes out Cody when she is least expecting it. On the bright side Cody will be in great shape this fall, if she survives Lilly's assaults. 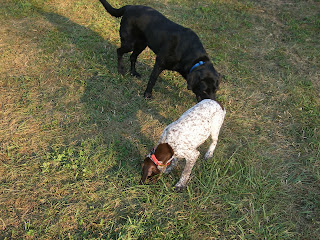 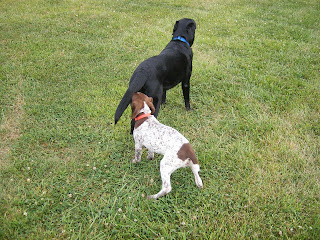 Lilly and Cody, getting to know each other 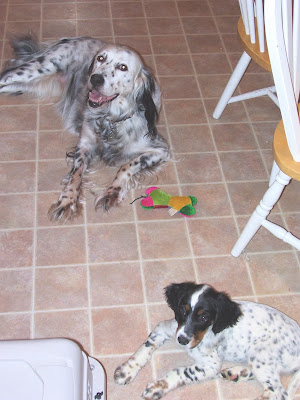 above: cancer dogge Katie
below: partridge following Phoebe
Got out with the new pup tonight to take her for a test drive. We've been around the Potomac Loop trail once or twice to stretch our legs. Tonight it was out for the real thing: grouse.

The weather was a typical 60 deg F August afternoon. (yeah right) (but we sure are enjoying our early fall this summer.) I wore my green khakis, Lacross mud boots, and a yellow t-shirt. Phoebe was sporting an attractive red puppy collar.

We were on the trail and in the woods by 7pm. She got her first taste of a muddy woods road; then we ventured into a favorite patch of thick stuff that most of you have seen at one time or another. Phoebe was seeing it for the first time.

We flushed a grouse at approximately 7:15 pm. We went over to where it had been, found a grouse feather (lucky!), and then moved on.

We flushed a second grouse about ten minutes later. This time, she started putting her nose to the ground and, although I may be imagining it, started using her nose to sniff out ground scent.

We spent a bit of time going over the area--scenting conditions were great, light breeze, damp ground, and she really seemed gradually to be hunting for scent. It was fun to watch.

We never put up another bird, but she went from being a dorky puppy to a grouse-dogge-in-training all in one evening. Pretty fun stuff. 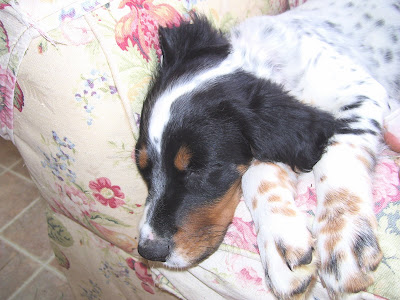 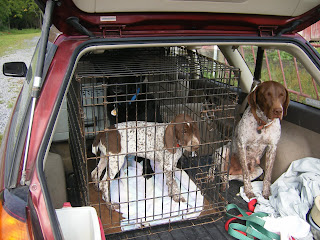 Canoga's Tiger Lilly now resides in Pennsylvania Furnace, PA. Her transition has been lightening fast. She's clearly smart as a whip and amazingly adaptable. After a quick trip to the world's greatest vet for a check up (all systems go) and shots, she was running round the backyard, investigating flowers, vegetable beds and children. She was particularly intrigued with Clayton's wheel barrow, which she eventually pointed. We worked on "no" and "here." Most remarkable, she now comes when called. No kidding. I am one, happy, proud GSP owner. 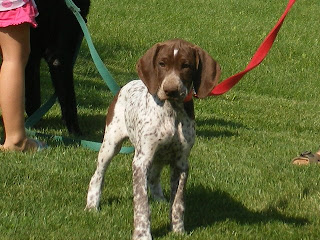 Earlier in the day after numerous unsuccessful attempts to lure the big bass with hula-jigs, crank-bait, kastmasters, spoons and sundry tackle tossed to the far corners of cover, we found that just dunking a worm off the dock nailed the bluegill.

Leah, with her brand new purple Shakespeare, pulled up a nice little bluegill. Being the princess that she is, she instantly grabbed the fish and yelled, “Cool!” After a quick release, she ran to get another worm. Add, rinse, repeat.

Jonah was getting a bit pissed at this point because he was trying the same technique in the same location without success. Unfortunately, dinner time was called and everyone went up. I stopped Jonah after looking at his face and realized it would be a very bad thing if we went up without getting him some much needed piscatorial satisfaction. I told him we’d stay behind to take care of business.

Jonah kept at it with me at his side. Lots of little bluegill nibbling the worms away, but nothing taking the hook. Another worm refresh, another dunk … WHAM! … something bigger takes the bait. I’m jumping up and down because I see there’s a nice smallmouth on the line. “A bass! Jonah, you got a bass!” Jonah is focused, concentrating, his face showing something not joyous, but … determination. He reeled and kept the line tight, the tip up. I continued my moronic semi-skip around the dock (no doubt freaking the fish out even further), but just as Jonah brings the fish up, it spits the hook. Jonah looks devastated.

No matter, I tell Jonah, let’s keep at it. Like a trooper, indeed, like an angler, he ignores history and experience and lets hope guide his hand back to the worm bucket. The fish gods smile down and five minutes later he lands a nice bluegill. This no consolation prize in his mind, he is ecstatic and triumphant. The fish goes to the kitchen for some butchersome filleting by my hand, but balanced out with a perfect fry with butter and garlic salt. Jonah eats and proclaims it good. The circle is complete.

p.s. I later sneak out to the dock to try for something a little more meaty. Five casts with a spinner jig thingie into the lake and I pull in two-foot northern pike. No one to witness it, so I do the mature thing and secure the rod, run to the house and tell EVERYONE to come outside and view my trophy. Jonah snaps a photo before it self-releases. Really, this thing was 3 feet if it was an inch.

p.p.s. Remind me to tell you of my monster Minocqua Muskie sometime. Rich, Julie and Carol still think I was lying.

see you when I get back

I am twenty minutes from being out the door to Maryland for the Josh Winchell Memorial Izaak Walton League Weekend Ethics Fest. But this just in. 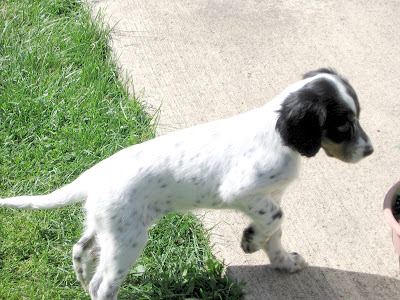 this one's got a long tail
I'll be driving to Michigan to pick her up next week.
Posted by Jim T at 12:33 PM 1 comment: