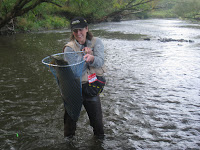 And on we go, in merry fashion. Here's a real big fish, netted in grand kamakazie style by the famous wife of a famous grouser. 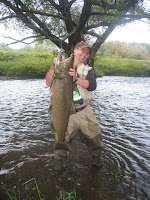 Bear Camp 2011 has ended, and there are no bear steaks to distribute to Grouser friends.  I had a great time, though, exploring the environs of my new ADK camp, christened Twin Moose.


I made camp with a friend two days before the opener of early bear season on the "middle landing" of the timber lands I am leasing in the Big Moose tract, near Big Moose station, Twitchell Lake, and Big Moose Lake. The weather was unseasonably cold and we spent the first few nights dealing with the hardest September frosts anyone up that way could remember.  But it felt like hunting season, and all was well, so long as you had a mummy bag and some good whiskey.  I had both.


My friend Paul and I fished Twitchell Lake and scouted on the first day and probably spent too much time crashing through the thick stuff bushwacking the property lines.  It is my opinion that we sent a bear right through the camp the day before the season, and I could hear my dog Artemis going absolutely ballistic like I have never ever heard her sound before. We could find no bear sign in camp, however.

On opening morning, we were up long before dawn and made a hearty eggs and sausage breakfast complete with Cagey's campfire coffee.  We flipped for stand selection and Paul won the toss.  He selected "the bench" stand, a stand up on a bench between two beech ridges.  Its a great spot.  That left me with the stand along one of the two beaver ponds on the lease, along a recently cleared logging road-come-snowmobiling trail.  There was game sign of all kinds in the mud there a-plenty- deer, turkey, fox & coyote, and older not-so-fresh bear sign.  And there were moose tracks.

After a few uneventful but stunningly beautiful early morning hours on stand, where I watched the frost melt from the leaves of the reddening maples and heard it rain down on the still lush forest floor like a spring shower, I was jolted from my reverie by the sounds of crashing brush and snapping twigs coming down the mountain to my south east.  The sounds got closer and louder, and my heart raced as I raised my gun (the trusty drilling) and began to collect a site picture through the scope of a spot on the logging trail where I expected the dark and large sounding bruin to pop out.  As I found a rest on the tree, the brush rustled and a branch snapped at the overgrown-with-brambles trail's edge.  Any second.  I saw movement.  I saw a a dark shape. It poked out its head and there stood before me a massive brown horses head.  I blinked. "What the f*#$?!" could be heard in the Adirondack wilderness.  As my mind raced to make sense of what was unfolding before me, and as I watched through the scope, the "horse," after pausing a few seconds to make sure the coast was clear, stepped into the clear.  The cross hairs drifted to vitals as this beast stood broadside.  And then, out plopped one, then two, miniatures of the big long-legged creature, which I was now identifying as  Alces alces americana.  Now, I have seen a few moose, but never a cow with a calf, certainly not a cow with twins, and most definitely not within bow range broadside.   This was just simply COOL.

The moose hung around abit, winding me, and causing me to remain frozen for as long as I could rather than make movements to lower my gun and try to retrieve my camera.  They finally ambled off, to the north west, vaguely in the direction of Paul, who was about a mile away.  The excitement was over by about 9:30 am.

I spent the rest of my morning hunt relishing what I had witnessed, and basking in the good fortune that was mine in seeing any moose at all in the Adirondacks.

Almost unbelievably, it turns out that about a half hour later, the same three moose passed directly under Paul's stand as well.  He, though, was, er, resting, and was awakened by the sound of a rock being kicked. He opened his eyes, saw moose, and grabbed a camera. What are the odds?!  The odds of me seeing a moose, never mind three moose, including twins at that, are slim indeed.  But the odds of Paul seeing them as well, almost a mile away in thick country, the same day--- now that is damn near auspicious. Hence, the camp has been named Twin Moose Camp.

The following day's hunt was uneventful and I bid Paul a goodbye.  I remained in camp for another few days, a week in total, exploring, paddling ponds, pointing and flushing grouse into impenetrable labyrinths of leafiness. It was bliss, but no bear. 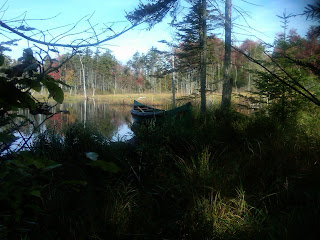 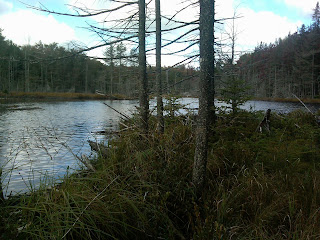 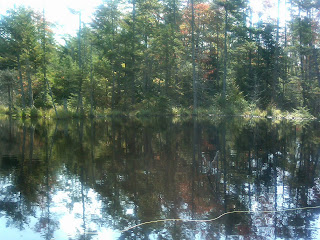 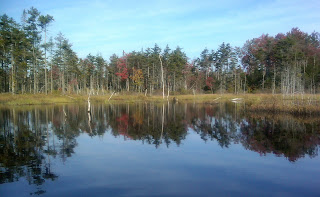 The Cohos are Here! 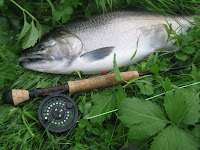 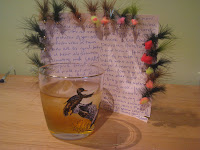 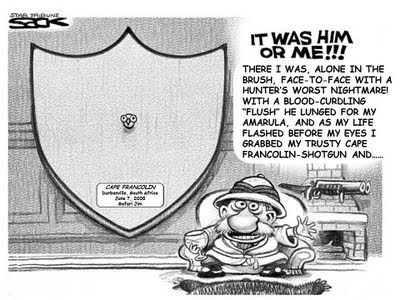 Not sure if I ever shared this. Enjoy. SJ
Posted by Safari Jim at 11:00 AM No comments:

Time to stock up on all the huntin' and shootin' gear you need this year, for you and the wife and kids.
Here's a neat gift idea...click to see more great gift ideas.

Time to get serious! 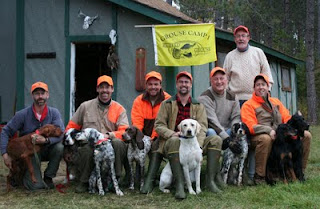 Grouse season starts a week from Thursday here in Michigan. Wishing all of you a productive fall. Hope we can share some dark beer, fine cigars and great camp stories!!