Just ran across this book on amazon.com and had to smile. 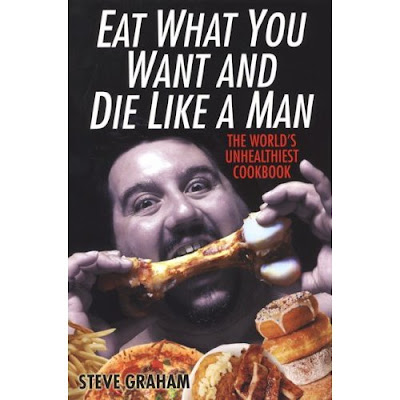 Graham is also author of Keep Chewing Until It Stops Kicking: Finding Your Inner Caveman.
Posted by Jim Tantillo at 7:06 AM No comments: 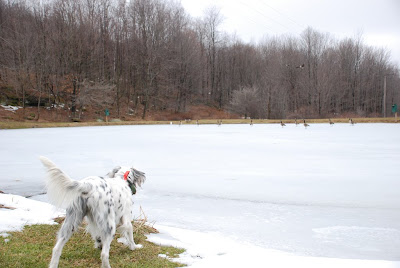 photo by Gotsetters
Posted by Jim T at 7:06 AM 3 comments: 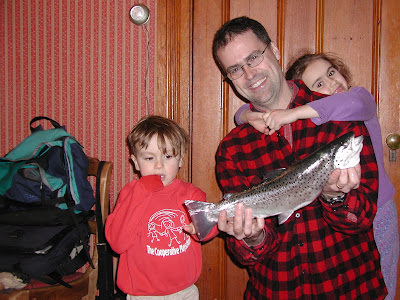 Milliken outflow
Two pounds of spring salmonid
For Easter dinner
Posted by Vicar(ious) at 10:18 AM 4 comments:

Last weekend was a bit busy around the ranch. I spent part of the morning on Saturday trying to get my tractor stuck in the mud due to the thaw we had. The rest of the day I spent splitting wood for the campfire and got quite a bit done. I had collected a bunch of good cherry wood from the hedgerow I have been cleaning the last few weeks and I also had a few poplar trees that the Thompson's donated to the cause. I borrowed their tractor with the splitter on it and proceeded to split wood until I couldn't take it any more. When I went to take the tractor back I noticed Carol out with the dog. She was chasing her and all I could think of was that they were playing. Come to find out she was actually hiding Easter eggs and the dog had run off with one. Sunday found my crippled self trying to get my sore back out of bed. After a couple of cups of coffee I was able to move around a bit better. Not in a particular hurry to get back to the wood splitting project I went to the computer and did some quoting for work with a deadline of stopping that crap at 11:30, I don't like to work from home to much if I can help it, they would come to expect it. At 11:30 I got up from the computer, put my play clothes on and went to Thompson's to get the tractor again. Back to the splitting I went but this time Dave showed up to help. We kept at it for a couple of hours but I finally had to give up due to my back killing me. We sat down and had a couple of beers, imagine that, and some conversation when all of a sudden I heard a scream coming from outside the house and saw Carol running after the dog again. This time my puppy was on a dead run in my direction, which for a old dog was pretty impressive, with something hanging out of her mouth. Apparently Carol was working on setting more eggs along with one of my daughters pets and the following picture pretty much explains what happened next!
Happy Easter! 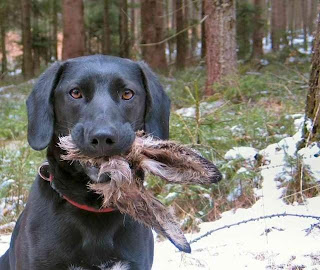 For the story on how Bears and Pork are in McCain's sights, see:

I hart my ammo box 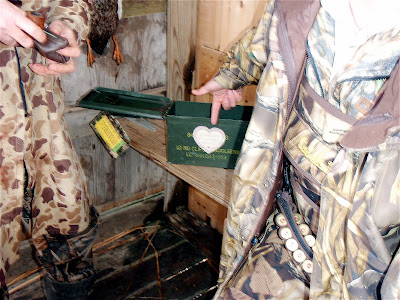 Hey, I worry about Rich too . . . here's a guy with some sort of Satanic symbolism on his ammo box. Rich, remind me what the hell the little heart sticker says, eh?
Posted by Jim Tantillo at 4:15 PM 1 comment:

Don't worry about me Rich 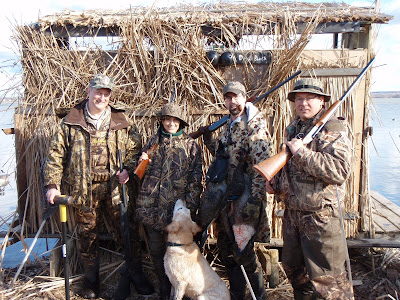 Serious Duck Hunters
Duck season is only seven months away.
Posted by Jim Tantillo at 3:32 PM No comments: 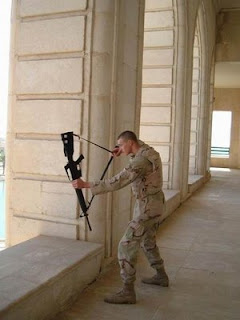 Deer season is only seven months away.
Posted by Jim Tantillo at 7:32 PM 2 comments:

. . . can be harmful to their health. Here is some SCIENCE that sets the record straight. Courtesy of the Onion.

Posted by Jim Tantillo at 9:05 PM No comments: My daughter, Victoria, has a knack for hearing them. She hears them howling here or there around the farm and draws our attention to them. Always has. When she was younger she'd say "Shhh...listen...Yicotees!"

I was planning to ice fish today, but it got too warm and the ice got to lookin' a bit too rotten for me. As I was looking out over the mighty Cayuga thinkin' how today wasn't a good day for a swim, I chuckled aloud thinkin' about coyote fishin', as was recently described on this blog. And then my friend George showed up, itching for a coyote hunt.

We crunched along in the hardening snow, aware that we were making a hell of a racket. We got to the "hidden field," recently "baited" with unsuccessful lambing efforts. Nothing but red tailed hawks. We discussed it. I ended up deciding to climb up into the cedar tree deer stand overlooking the hidden field while George and Ann took a walk.

I spent about an hour watching flight after flight of geese. More hawks checked out the bait pile. Checked the watch, it was a quarter to five. And then, way across the field to the west, out came a runnin' a coyote... not a flat out run, but kinda lopin' along, yet faster than a trot. I guessed the range to be about 300 meters, so I dialed up the scope to 10, and got on 'im. Movin' left to right, I led him good and let fly. Bang. Wouldn't ya know, I dropped him there. At the shot, another coyote appeared, but as the first still had its head up, I passed the shot, not wanting to expend rounds. 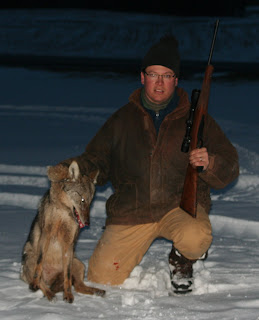 The second coyote approached the one I had hit, and the hit coyote attempted to join the escape, but was clearly badly hit in the back hip. Try as it might, it made slow and difficult progress toward the hedge row and cover. I tried two more shots but didn't seem to connect. I yelled for George and let him know the direction of my downed animal. He was on the trail quickly, as I unloaded and climbed out of the tree. George easily found the blood trail, and as I ran up to the hedgerow, out of breath, we could both see the crippled coyote in the next field, still trying pathetically to get away. George had his gun up, but sportingly asked me if it was ok to give the coup de grace. As I was out of breath and still quite a bit back, and the animal was clearly suffering, I gave George the green light. He ended it cleanly at a range of about 75 meters.

The coyote had a beautiful coat. It turned out to be a female. We went back to the point of impact, where there was a clear break in the tracks in the snow, as well as blood and hair. I paced back to my shooting spot 349 paces. Given that it was snowy, I would say confidently that my shot was plus 300 meters, but not necessarily 349. 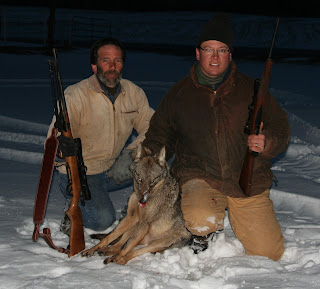