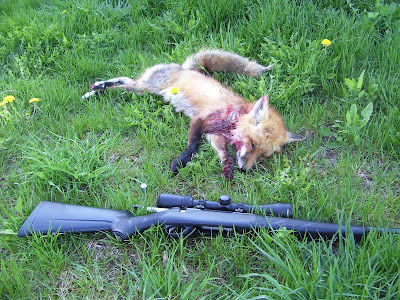 Reynard meets his demise
Sluiced the first fox of 2009 yesterday. My daughter Sophia had spotted him while she was doing her homework on the kitchen counter. This one was tricky because of the tough angle he initially presented through the swingset. I also had a tough time setting up into position on the back mudroom steps because of my gunshy lab getting in the way.

Finally he moved away from the swingset, and I put a bead on him and fired away. He flipped over, but incredibly came back to life, got up, and started walking away with our less than one year old camper directly behind him.

I waited for him to clear the trailer's tires, with the knowledge he had but five feet to crawl off into the bushes. I figured the bullet would go through him and end up in the ground under the camper somewhere. So then I shot him a second time, and he was down for good.

Unfortunately these Federal Nosler tips do a hell of a lot of damage at 60 yards (or 600 yards for that matter), and when I arrived at the scene of the crime there was fox blood, guts, and tissue sprayed all over the side of the camper. What a mess.

And of course, in the five minutes it took me to get the hoses connected to clean it off, the little bits and pieces of fox gore had all baked hard and dry on the camper walls in the late afternoon sun. I didn't have a scrub brush so I used my fingernails.

What's more, is that of course all of our garden hoses had decided to crack over the winter, leaving me with an intermittently but nicely watered lawn along the hose path and severely depleted water pressure at the hose's end 100 yards from the house. I can tell you now that cleaning dried guts with reduced water pressure is like using a squirt gun to wash three day old dirty dishes.

Twenty minutes later the camper was clean and I was resolved never to shoot a fox in front of the camper again. 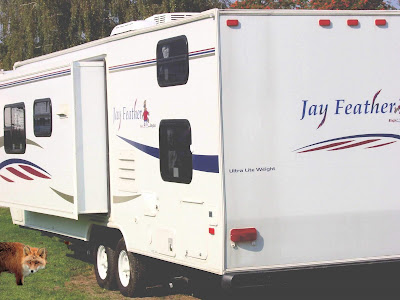 kids don't try this at home
Posted by Jim Tantillo at 3:12 PM 2 comments:

Doctor Richard C Stedman is negotiating with Riegel Marine for Naval Fleet Expansion (from 0 frigates to 1 frigate). Apparently the cut and pasting has gotten under his skin and now we wait in breathless anticipation for the HMS Authentica.

and here we have conclusive evidence of the real truth of the weekend's trolling. 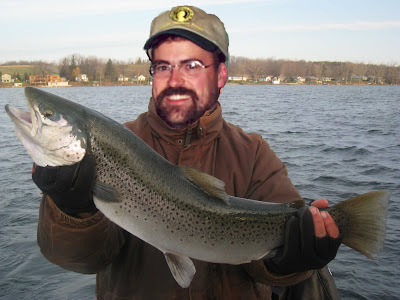 fish Cagey claims to have caught
Posted by Jim Tantillo at 8:37 PM 1 comment:

Labels: geese cagey claims to have shot, grousing and ball-busting 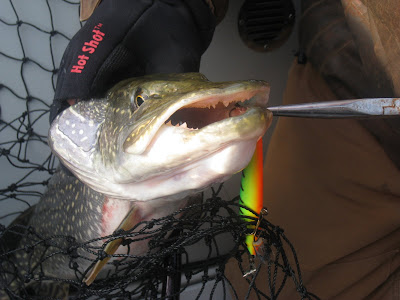 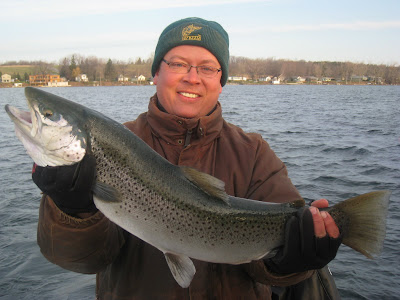 With frozen hands,
tossed around on Cayuga's cruelest April waters,
I wallow in prehistoric pike snot, smelling of my youth.
Whenever I twist longnose pliers to treble hook shank, my grandfather is near,
although I never called him "grandfather".
Cagey meanwhile soldiers on, defending our shores and loved ones
from the German immigrants, more democratic than the natives,
as they bring the depths of the lake up, up, up
into the towns, forests and fields
during the uncertain verb seasons.
Posted by Vicar(ious) at 1:18 PM 4 comments: