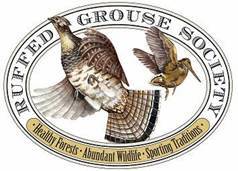 According to RGS regional director Tripp Way, registration is $850 per gun and  consist of a “Meet and Greet” reception party on Wednesday at 7 p.m., three breakfasts, two field lunches and two dinners — which includes a lobster or steak repast Friday evening. Hunting hours will run from 8:30 a.m. – 4 p.m., Friday and Saturday. Lodging will be at The Twin Pines Cabins, which has a spectacular view of MillinocketLake and Mt.Katahdin.

“Wednesday’s meet and greet will provide information on the terrain, followed by a Q&A session with RGS regional biologist Andy Weik,” Way said, adding that hunters are encouraged to bring their own dog or they can hunt with huntsmen’s dogs.

A 50-percent deposit is required by September 21, 2013, with remaining payment due prior too, or at the event. All major credit cards accepted and, with the exception of a $100 cancellation fee, refunds will be provided before September 27, 2013.

Reservation forms can also be downloaded from the Internet at: www.ruffedgrousesociety.org/UserFiles/File/13AugustaMEMillinocketHunt.pdf.

Sounds like a good time!
Posted by Jim Tantillo at 3:27 PM