Spidey was a Grouse Dog 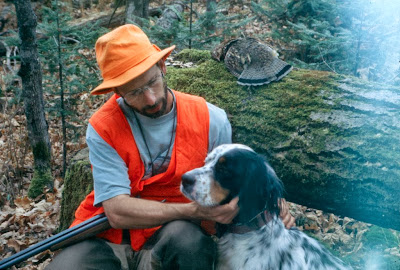 Last Friday Spy breathed his last.  I saw it coming, and dug a hole for him a couple days earlier.  He went to the earth in the side yard on a pleasant October morning with a couple grouse tail feathers and a 20 gauge shot shell. That evening after playing catch and shagging grounders and flies, Nolan and I stood over Spidey's grave and I told a few stories, and a bit after sunset a woodcock came in low over the field and set down on the lawn about 20 yards away.  It seemed fitting. 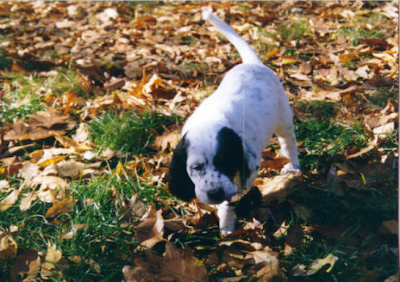 Spy was the last of his litter; Kate went before him a few years ago.  He was okay on woodcock, but he seemed to really enjoy finding grouse.  He was certainly more fleet of feet than either Kate or their dad Butch.  Rather than trail birds, he seemed to pin a higher proportion of them than did Butch.  I remember the first pointed grouse that I killed over Spy, his first season when he was a year old.  It was an October afternoon at Frye Mountain WMA in Maine.  The bird held very tight and I was expecting a woodcock. When it rocketed out I downed it with one shot from my 20 gauge SKB SxS; that was also the first shot I had taken on grouse with that gun, which I had picked up that summer. That gun and dog combination was together for 13 seasons.
﻿﻿﻿﻿﻿
﻿﻿


I don't recall the first woodcock I killed over Spy, but I vividly remember his last.  Three years ago, when Spy was 13, I'd hunt him up to a couple hours a day and Brody (1.5 yrs at the time) would get the lion's share of time.  We were in Minnesota and I was guiding a gentleman from PA.  Spy pointed this woodcock 3 or 4 times and each time we either didn't get a shot or missed.  It was getting late and the dog was getting tired. FINALLY, my guy from PA kills the bird, and I'm jumping around cheering, it was such a relief and I was so grateful.  So I leash Spy and lead him -- or more accurately, he leads me -- out toward the truck.  I've got my shotgun (same 20 ga SKB) over my shoulder, Spy tugging on the leash pulling me through the brush and saplings. He suddenly stops and I just about trip over him, and a moment later up flies a grouse.  My shotgun comes forward off my shoulder, butt-stock to cheek and shoulder, and pop -- drops the grouse.
Good old Spidey.  He was a grouse dog.
﻿
﻿
Posted by Path Walker at 12:47 AM

Ah PW..I never know what to say in these moments and I'm not very poetic, but I'll just say that I'm truly sorry for your loss. We've all been down this road, and it sucks! But you and the fam got to love and be loved by Spy for a good happy 16 years. That's awesome. Cherish the good memories and not dwell on the end. Bonasa Northern Spy we salute you!!

I am sorry to hear about Spy. He was indeed a grouse dog. RIP.

Thanks guys, I appreciate your thoughts here and the emails all y'all sent (including Jim C via Jim T from the Yooper Woods). Eventually we all have to pay the tab on the memories a pup makes for us -- in Spy's case 16 yrs worth. It's never easy, but in this case it could be a lot worse, right?
Looking forward to everyone writing up and posting some of those new memories this fall.
Thanks,
PW

I'll add my condolences to the list. Judging from all the photos you posted of him over the years, he lived up to all his potential as a grouser, and as a companion.