Opening Day
Saturday dawned snowing on a couple inches of snow, low 20s and not too windy.  Pretty nice conditions.  I was sitting in a ladder stand down the hill in the woods below the house at the upper end of an 80-yard long x 40 yard wide glade. Angela was sitting in the "driveway stand". The shooting started about half an hour before the season starting time, and stayed at a fairly fast pace for a few hours -- the sound of freedom and the hope of larder-stocking echoing across the hills.
Angela got a nice doe right off the bat with a nicely placed neck shot at 30 yards.  I saw a doe early on, but it was about 10 minutes before legal time so I didn't even raise my gun.  Right about sunrise I heard -- almost felt -- a grouse fly in and land overhead in either my tree or an adjacent one. Half an hour later, a doe approached the glade through the woods on the left.  Its trajectory would bring it in front of my stand at about 60 yards.  It stopped while still in the thick stuff, and I knew it was just a matter of time before it would offer me a killing shot.  But what did I know?  After a few minutes, the doe turned sharply left and sauntered away down the hill and soon out of sight, and my grouse took this opportunity to depart its perch as well.  Twenty or thirty minutes later a deer that I think was probably the same individual ran back up the hill, turned, and disappeared the along the same reverse path. And that was it for my 3-hour morning sit. 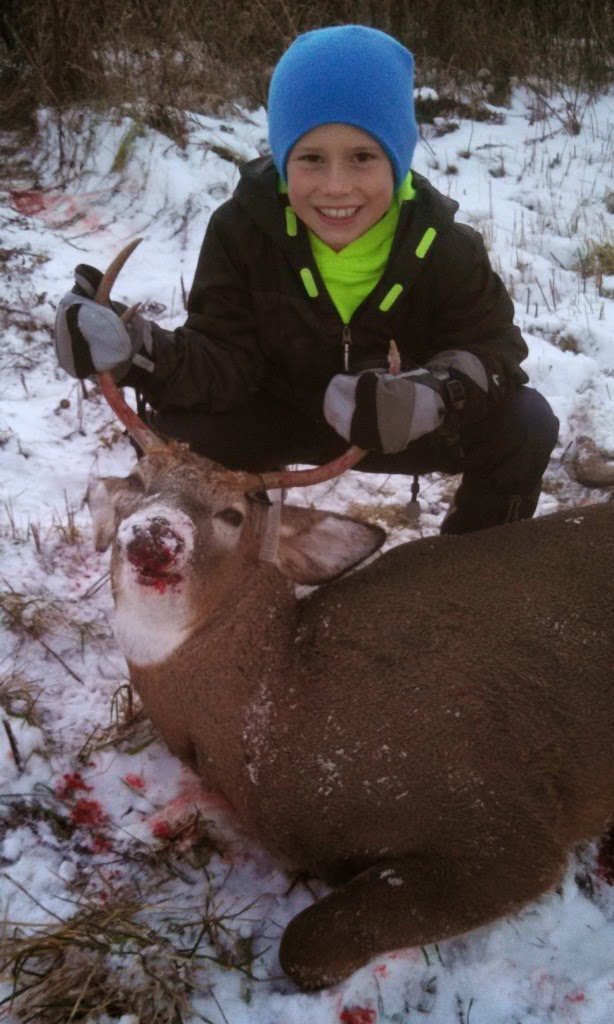 In the afternoon, Collin joined me in the driveway stand. The stand was probably designed for one large butt, and we were able to fit snuggly into the seat side by each.  We started our vigil about 3:00, and I was just hoping Collin's patience would last until sunset.  Snacking on apples and conversing in whispers, 45 minutes passed quickly. I was surprised then to see a doe appear along the power line 200 yards up the driveway, and I was quickly disappointed when it turned away and departed from view into the dense conifers. But within seconds a buck materialized where the doe had been.  He began to follow her trail, so I blatted loudly to stop him.  He obliged and then turned broadside, and paused long enough to allow a shot behind the shoulder.  At the shot he ran in a short circle, ultimately dropping out of sight but within about ten yards from where he was standing when I shot.  We took our time walking to find our buck.  Collin was an enthusiastic assistant, holding a leg out of the way while I worked the knife, paying attention while we traced the GI tract and identifying some of the organs himself, and making sure we retrieved the heart from the pile. Collin was a happy camper, and that evening his brother was a little envious, calling dibs on the next deer hunting opportunity.
Day 2 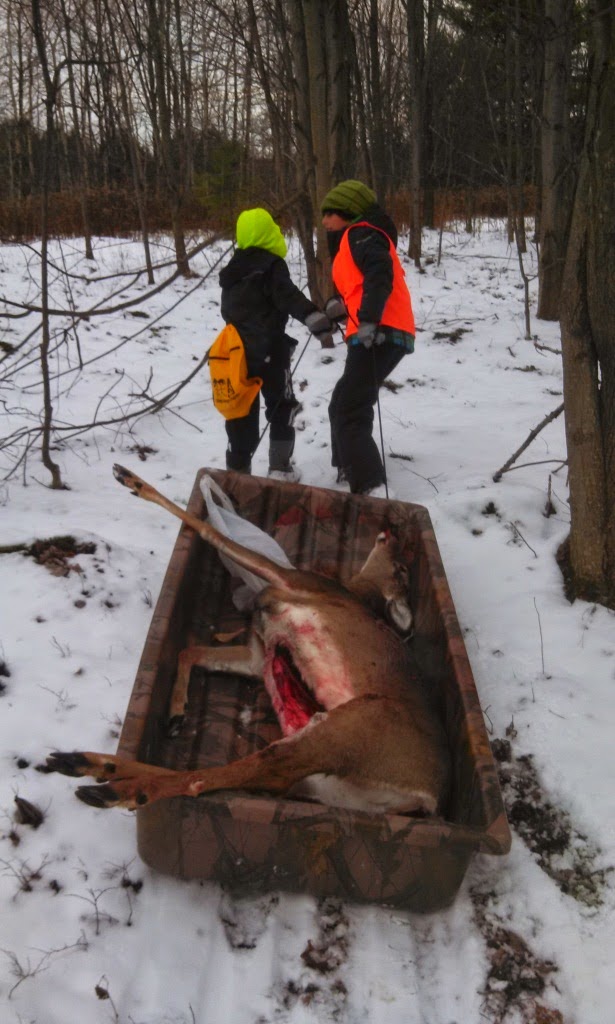 The next morning I sat in a different stand, at the south end of the property. I don't encourage the boys to join me on early morning hunts, as the fun level tends not to be to everyone's liking, so the bears snored on this morning.  The shooting activity this day was high again.  After about an hour and a half, five does approached from the south.  They stopped behind a heavy screen of boles and branches 70 yards distant.  After the group surveyed the woods ahead for a minute or two, they broke into a run and came into clear view and shooting range.  Again I had to blat, the first of which was not heard, so I blatted louder and they all stopped.  The lead doe seemed largest, so I lined up the cross-hairs behind the shoulder and squeezed a bullet toward her lungs.  At the shot she sprinted 80 yards out of sight, but I was confident of the shot when I heard a crash from her direction.   After confirming that she was dead, I went to the house and breakfasted with the boys, and we returned with sled, knife and string.  Nolan and Collin back-tracked the blood trail to where the doe had stood when she was shot, then returned and held legs out of the way while I operated and gave lessons in field dressing and ungulate anatomy.  However, I've got to say by now they know the names of most of the parts. They were happy that my shot missed the heart, and we put it in the sled along with the deer... and the kidneys, which Nolan wants to try.  Hmmm. Anyway, we were all pretty satisfied to hang a 2nd deer in the barn, and just in time to go to Collin's soccer game.

(ps) I will help you chase that grouse around once i am back from Sweden. Been a strange fall without hunting.